Pooper:
After a lot of shenanigans with demons from hell, the two priests close the entrance to Hell in the Brooklyn brownstone and Alison Parker (Cristina Raines) becomes Sister Therese, the new sentinel.

Long Ending:
The film opens on a cabal of Catholic clergy meeting to discuss a new threat. Monsignor Franchino (Arthur Kennedy) flies to New York to confront the evil.

We are introduced to rising model Alison Parker (Cristina Raines). Although her wealthy boyfriend Michael Lerman (Chris Sarandon) wants to marry her, she feels that she needs more time on her own before settling down. Her realtor (Ava Gardner) takes her to visit a gorgeous, furnished apartment in the City. The rent is unbelievably low and Alison moves in.

Her neighbor Charles Chazen (Burgess Meredith) insinuates himself into Alison’s life. Charles and the other residents tell her that they hate the resident living in the top floor, a blind priest named Father Halliran (John Carridine). We also learn more about our protagonists’ pasts. As a teenager, Alison walked in on her father engaged in a three-way extramarital affair. Her father beat her and she subsequently tried to commit suicide. As an adult, she had an affair with Michael. When Michael’s wife found out about the affair, she killed herself and Alison again unsuccessfully attempted suicide. Several cops believe Michael purposefully had his wife murdered, and he is revealed to have various shady connections through his law practice.

Soon after moving in, Allison becomes ill, hears strange noises at night, and is accosted more and more often by her neighbors. She complains to her realtor, and the realtor tells her that she and Father Halliran are the only tenants living in the apartment building. When she returns that night, she finds no trace of Charles or the other neighbors. Things culminate when she finds and attacks the ghost of her father in the apartment building. Unknown  to Alison, Monsignor Franchino is now living with Father Halliran.

Michael begins looking into these strange goings on and makes several troubling discoveries. The names and identities of the other tenants Alison met are the names and identities of deceased serial killers. He also finds out that the building is owned by the Church. Using one of his criminal contacts, Michael breaks into the offices of the diocese and finds a file on Father Halliran. He discovers that Father Halliran is an alias and that “Halliran” was a suicidal man who became a priest the same day his prior identity was declared dead. He then finds other files showing that other former “suicide” victims actually joined the clergy and lived in the same apartment before Halliran. He runs off to save Allison from this fate. He tries to kill blind Father Halliran, but is attacked by Monsignor Franchino during the struggle.

Alison returns to her apartment from a friend’s house. She is met by Michael therein, but soon deduces something is amiss when Charles Chazen’s cat appears and jumps into Michael’s hands. Michael reveals that Monsignor Franchino killed him and his soul is in Hell as he did, in fact, murder his former wife. His face begins splitting open as Allison flees. She is confronted by Charles, who explains that the apartment sits on a gateway between Hell and Earth. Charles is the head of many demons (now including Michael) who are legion. He explains that Alison is meant to stand as a sentinel to keep them contained in the apartment, but that if she kills herself, they can go free. He summons an army of deformed demons (including her dead father) to attack her. She is about to kill herself when the clergy appear. Father Halliran holds off the demons while Monsignor Franchino explains that Allison’s soul is damned due to her suicide attempts and adultery, but that if she agrees to become a nun and act as sentinel, her soul will be saved. Alison agrees and Charles screams in rage as the demons recede into the shadows.

The film ends with the apartment being demolished and rebuilt. The realtor from the beginning of the film is showing an apartment to a new couple. The realtor explains that a nun lives in the building. We cut to Alison, now blind herself. She has taken the alias of “Sister Therese,” and sits as sentinel to combat the demons’ inevitable return (and hinting that one of the new couple will some day take Alison’s place as sentinel). 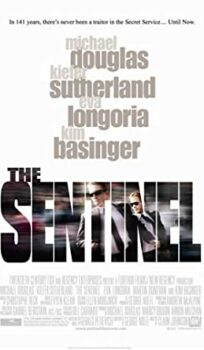