After having a railroad spike driven through his scrotum by Dargent Peytraud (Zakes Mokae), Dennis Allan (Bill Pullman) leaves Haiti and then returns to save Lucien who has been captured by Peytraud.

Meanwhile Louis Mozart (Brent Jennings), inventor of the original zombie powder, has had his head cut off by Peytraud.

Amidst a revolution in Haiti, the zombie Christophe (Conrad Roberts) unburies the zombie Dennis, who finds Peytraud about to cut off Lucien’s head.  In their struggle Dennis destroys Peytraud’s collection of souls, rendering him powerless as he explodes into flames.  Peytraud revives himself and attacks Dennis, who uses his new zombie powers to drive a spike into peytrauds groin and watch as he is pulled through the ground to hell.  Lucien and Dennis are finally safe. 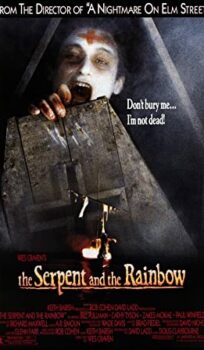