Sherlock Holmes (Nicol Williamson) reveals under psychoanalysis that Moriarty (Laurence Olivier) isn’t actually an evil “Napoleon of Crime.” Rather, he was the mathematics tutor to the young Holmes brothers, and had an affair with their mother. Upon discovering the affair, their father killed their mother, and this tragic event shaped the somewhat bizarre personalities of both Sherlock and Mycroft (Charles Gray). The psychological breakthrough allows Sigmund Freud (Alan Arkin) to cure Holmes of his cocaine addiction (and of course, enables Holmes to solve the Deveraux kidnapping mystery). 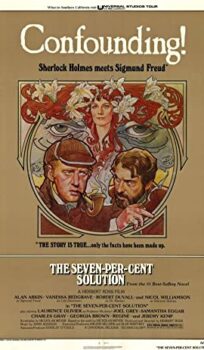