Lamont/The Shadow (Alec Baldwin) eventually figures out that Khan (John Lone) is headquartered in the Hotel Monolith, which he had turned completely invisible and had hypnotized the whole city into thinking that there was just a vacant lot where it stood.

Lamont enters the hotel, kills Claymore (Tim Curry) (who had earlier tried to kill him in a submersion tank) and evades Khan’s warriors, and confronts Khan in his throne room. Khan sends the living Phurba knife at him, which almost kills him, but after forcing himself to concentrate, he overcomes Khan’s power and gains control of the Phurba and sends it into Khan’s stomach. This breaks Khan’s concentration, which causes him to lose his hold over the mind of Margo’s (Penelope Ann Miller) father Reinhardt (Ian McKellen) and render the Hotel Monolith visible

Khan retreats into another part of the hotel, and Lamont follows. Margo and Moe (Peter Boyle) enter the hotel and find Reinhardt, and after Margo tells Moe to go call the police, she and her father get to Khan’s atomic bomb and deactivate it despite some trouble with it. Lamont chases Khan into a room full of mirrors, and after psychically smashing the mirrors to disorient Khan, he sends a large shard into his head, which renders him unconscious. Lamont, Margo, and Reinhardt get out of the hotel just as the police arrive.

Khan awakens in a straitjacket in a padded room in a mental hospital. When a doctor (Aaron Lustig) comes in to give him food, Khan tries to hypnotize him into releasing him, but finds that he is unable to. The doctor soon tells him that he had underwent life-saving surgery to get the shard out of his head, and a seemingly useless section of his frontal lobe had to be removed in the process. It turns out that that section was what harbored his powers, so now he’s completely powerless. The doctor then leaves, and as Khan screams at him to set him free, we see that the doctor is wearing one of the Shadow’s rings, signifying that he is an agent and that he had removed that part of Khan’s brain so he would no longer be a threat. 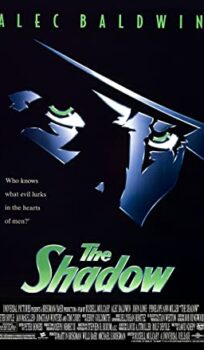