LONG VERSION
Set in 1870, Jesse Heywood (Don Knotts) has just graduated dental school in Philadelphia and decides to go to California to start his practice.  His mother gives him his uncle’s gun from the Civil War as a going-away gift.  No sooner does he arrive there when the stagecoach he’s riding in gets robbed by two men.  A posse gives chase and captures one of them.  It’s not a man but a woman outlaw named Penelope “Bad Penny” Cushings (Barbara Rhoades).  The federal marshal gives her a choice:  face up to 300 years in prison, or receive a full pardon if she agrees to go undercover for the government to help find whoever is smuggling guns to renegade Comanche.  She accepts and heads to the town of Big Spring, the same town where Jesse is buying a wagon and supplies.  Once there, she meets up with a local attorney, also working undercover, and they will pose as a married couple traveling together on a wagon train.  Unfortunately, the plan goes awry when the attorney is mysteriously killed that night.  Jesse is summoned to help, but since he’s not a medical doctor, he faints at the sight of all the blood.

The next morning, Penelope learns that the wagon master won’t allow an unaccompanied female on the wagon train.  Now in need of a new “husband”, she remembers an earlier conversation with Jesse where he mentioned that he is also going to be part of the wagon train.  She meets up with him, and the smitten Jesse is easily tricked into marrying her.  She never tells him her actual mission.  With her new husband in tow, Penelope and Jesse join the wagon train and meet the others in the line.  One of the wagons features a minister and his minion, who are the actual gun smugglers.  That night, Jesse is ready for his “wedding night”, but instead he draws guard duty.  The next morning, the tired Jesse falls asleep, and their wagon falls behind.  A band of Indians attacks their wagon, and he and Penelope defend themselves.  While Jesse shakily holds his gun and misses everything he shoots at, Penelope uses her rifle to kill several of the attackers.  The rest of the train circles back to help and sees all of the dead Indians, and assume the Doc killed them all.  Since he didn’t know Penelope was also shooting, Jesse thinks he really did kill them.

Now believing himself to be a real gunslinger, Jesse stops in the next town and trades in his East Coast suit and derby hat for an all-black western outfit, complete with black cowboy hat.  Meanwhile, Penelope is checking out the other wagons to get info on who the real smugglers are, and quickly suspects it’s the minister and his minion.  At the same time, they begin to suspect the Doc is a federal agent, and they hire local gunslinger Arnold the Kid to kill him.  Arnold, wearing the exact same outfit as Jesse, challenges him to a gunfight and Jesse accepts.  Jesse draws and he is badly shaking his gun, but a shot is fired and Arnold is killed.  Penelope actually fired the shot from a nearby window, but once again Jesse takes the credit.

While at the sheriff’s office collecting the reward for Arnold, Jesse sees Bad Penny’s wanted poster, and immediately recognizes her as Penelope.  He takes the poster and tracks her down at the church, where she discovers the rifles hidden in the basement, confirming her suspicion.  He confronts her about the poster, and she admits she is Bad Penny.  She also comes clean as to her deal with the government.  The smugglers overhear the conversation and realize she is the agent.  Now back at their hotel room, Penelope changes back into her western outfit and tells Jesse she needs to leave in order to summon the cavalry to help with the rifles and smugglers.  He offers to help, but Penelope reveals to him that she was the one who killed the Indians and Arnold the Kid, and he “couldn’t hit a bleeding elephant in the snow”.  She also tells Jesse the marriage was just to get on the wagon train, and it will be annulled the first chance she gets.

A heart-broken Jesse, once again wearing his East Coast suit and derby hat, goes into the saloon and tells all of the townspeople, including the minion, that he is a fake, and they quickly shun him.  As he is getting drunk, Penelope is about to leave town when she is taken by a group of Indians working with the minister.  They load the rifles into wagons and leave town, taking Penelope with them.  A drunken Jesse stumbles out of the saloon just as they are leaving, and he sees a tied up Penelope with them.  Jesse gets his gun, steals a horse, and goes after them.  He chases them into the desert, and begins to suffer from heat stroke, but eventually comes upon the Comanche’s encampment.  The smugglers are there handing out rifles and whiskey, and the Comanche are whooping it up.  He sees several Comanche women bathing, and he steals one of their outfits and sneaks into the camp dressed as an Indian woman. 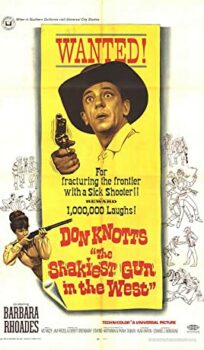