Andy Dufresne (Tim Robbins) escapes through a hole he has been digging in his cell wall since he got the Rita Hayworth poster (that’s what’s hiding the hole). On his way out of the state, he collects all of the money from the phony accounts (well, it was his signature), and stops off at a newspaper office, leaving a package with proof of warden Norton’s (Bob Gunton’s) corruption. The warden commits suicide rather than be arrested by the State Police. Eventually, Red (Morgan Freeman) is released on parole. Despondent and suicidal, he finally visits the tree that Andy mentioned. Under the out-of-place rock Red finds a box full of cash, and a reminder that Andy awaits him in Mexico. The film closes at the two are reunited. 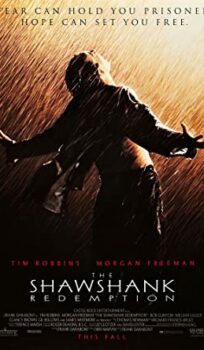