The movie opens with a young girl in her bedroom screaming.  Something is in the room watching her.  Her parents rush in, and lure the something up to the attic, where they lock it behind a steel door.  Soon after, the girls parents both die, and she is sent to live far away.

About 20 years later, the girl, Susanna (Carol Lynley), has inherited the house where she was screaming as a child.  It is a large mill house on a remote island. Although she has vague bad memories, and does not want to go back there, her husband, Mike, insists.  Mike (Gig Young) wants to fix it up as a vacation home.  Most of the people they meet on the island are related to Susanna, and all of them are hostile.  When they learn who she is, they always say she must not stay and she must not go back to the house.  Most notable are Aunt Agatha, who babysat her as a child, and her cousin Ethan (Oliver Reed), who leads a gang of young thugs.  When they enter the house, hidden eyes watch Susanna from behind walls and through floorboards.

Although he is her cousin, Ethan wants to rape Susanna.  He tries on the pier, but Mike arrives, and Mike gives Ethan a beating.  Later, Ethan has his thugs delay Mike, and Ethan enters the mill house to get Susanna.  Ethan goes up to the attic chasing Susanna.  It looks like Ethan has trapped her, but something attacks Ethan and slashes him to death.  Ethan had a torch, which drops, setting the mill house on fire. 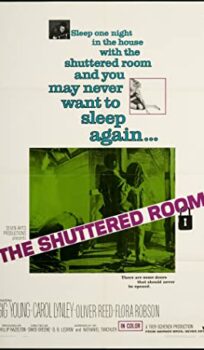