SHORT VERSION:
Thanks to Antoine’s spirit, the Huskies manage to get to the finals of the NCAA tournament. However, after having heard complaints from his teammates about how they feel that Antoine has become even more of a ball hog now than when he was alive, as well as how they feel they have essentially cheated to get to where they’re at now, Kenny meets with Antoine in the locker room before the championship game and tells him to stay out of it, wanting the team to win (or lose) on their own. He also adds that they will forfeit if he does interfere, and the team then enters and backs up Kenny on that. Though disappointed, Antoine yields to them.

The opposing team, the Minutemen, dominate the first half and leave the Huskies trailing by twenty points come halftime. Before the Huskies go out for the second half, Kenny steps up and becomes a leader by encouraging his team to take Antoine’s spirit out to the court in their hearts and play at the level he knows they can play at. Invigorated, the Huskies retake the court and narrow the gap on the scoreboard until they are just two points behind with sixteen seconds left to play. Kenny manages to get the ball and make a three-point shot just as the clock hits zero, and Antoine appears and tells him he will get the ball in, but Kenny orders him not to. Antoine honors his wishes, and Kenny scores the basket, winning the NCAA title for the Huskies.

As the Huskies celebrate with their fans, Kenny kisses his love interest R.C., then notices Antoine heading up the arena’s steps towards a bright blue light. Kenny runs up to him and finds out that he is returning to Heaven, and the brothers bid each other a heartfelt farewell. Kenny then returns to the court to continue celebrating.

LONG VERSION:
As the University of Washington’s Huskies progress through the NCAA tournament, Kenny’s (Marlon Wayans) teammates begin to have qualms about Antoine’s (Kadeem Hardison) spirit assisting them in their games when he starts to behave like he is the team. Around the same time, R.C. (Michael Michele) – a reporter for the university’s newspaper who is dating Kenny but has an interest in getting a story on him – closely looks over some footage from one of the Huskies’ games and figures out that Antoine’s ghost has been helping the team get their victories.

After the Huskies make it to the Final Four, Kenny is confronted in his hotel room by the rest of the team. They inform him that they don’t want any further help from Antoine, partially because they feel that they have essentially cheated to get to this point, but mainly because they feel Antoine has become even more of a ball hog now than when he was alive. When Antoine enters moments later, Kenny tells him that the guys want him off the team, prompting him to go berserk and trash the room. Antoine then calms down and confesses to Kenny that he hates that he died because he had plans for his life, and though he tells Kenny that he will go if he wants him to, Kenny tells the guys that Antoine is staying. After the Huskies’ next practice session, R.C. shows up to give her story about Kenny and Antoine’s ghost to her superior Mikulski (Kevin Dunn), but Kenny stops her and tells her that Antoine is here with them before his coach calls him away. When she meets with Mikulski and he asks for her story, she claims she needs a little more time to work on it, and after she leaves his presence, she decides to forget about getting the story published altogether and dumps it in the trash.

The Huskies win against Georgetown University’s Hoyas to clinch a spot in the championship game against the University of Massachusetts’ Minutemen, but during the game, Antoine’s antics cause him to seriously injure the Hoyas’ star player Jerrod Smith (Flex), who is a friend of Kenny’s. As Kenny is sitting in the hospital’s waiting room awaiting his chance to see Jerrod following surgery, R.C. shows up, and she tells Kenny that she knows Antoine had something to do with Jerrod’s accident. She tells him that he needs to make Antoine stop, but Kenny replies that Antoine calls the shots and he will never listen to him, prompting her to remark that he is still letting his brother run his life even though he is dead. He responds by saying that she doesn’t know what she is talking about and doesn’t know what it’s like for him to try to live his life without his brother. After a short pause, she agrees that she doesn’t know what it’s like but then says that neither will he, until he lets Antoine go.

Before the final game, Kenny goes to the team’s locker room and summons Antoine, and he soon orders him to stay out of the game. Antoine predictably protests this, saying that this is what they have always dreamed of and that they are partners, but Kenny replies that he has always been more of a sidekick than a partner to him, and while it was fun, he just can’t do that anymore. The rest of the team then comes in, and with their support, Kenny tells Antoine that they will immediately forfeit the game if he tries anything. Though disappointed, Antoine yields to them and leaves.

The Huskies struggle against the Minutemen in the first half and are down twenty points come halftime. As they sulk in their dressing room before the second half, Zigi (Vladimir Cuk) says that they can’t win this game without Antoine. Kenny stands up and says that the reason they aren’t doing so well is that they have no soul, and when they get back on the court, they need to take Antoine’s spirit with them in their hearts and play at the level he knows they can play at. The team gets behind him, and Coach Pederson (David Paymer) is happy that Kenny stepped up and became a leader. Having been lingering around out of Kenny’s view, Antoine is shown to have been deeply moved by what his brother has just done.

The Huskies retake the court and close the gap on the scoreboard until they are down by just two points with sixteen seconds left to play. Kenny manages to get a hold of the ball and makes a three-point shot just as the clock hits zero, and Antoine shows up and tells Kenny that he will get the ball in, but Kenny orders him not to. Antoine honors his wishes, and Kenny scores the basket, winning the NCAA championship for the Huskies.

As the team celebrates with their fans, R.C. comes up to Kenny and kisses him. Kenny then notices Antoine heading up the arena’s stairs towards a bright blue light, so he runs up to him and stops him. Antoine praises him for his performance before informing him that he must return to Heaven, and they hug each other and say their goodbyes. Before disappearing into the light, Antoine assures Kenny that he will always be by his side. Kenny returns to the court to continue celebrating, and he watches as the blue light fades away. Pederson sees him staring in that direction and asks Kenny if that was their sixth man, and Kenny replies that that was, then says “A&K, all the way”. 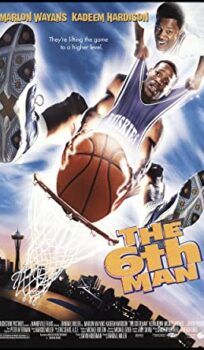