Long version:
Having effectively been able to help Cole (Haley Joel Osment) in his dilemma with the ghosts which were constantly “haunting” him -this manifests into Cole helping the ghost of young Kyra (Mischa Barton) to communicate her grieving father that her own mother had poisoned her to death-, and seeing how this even helped him to open more to other people, including his mother Lynn (Toni Collette) -also visible in Cole’s success at the school play, and later on in the revealing sequence in which there is a of catharsis between mother and son about the death of the grandmother-, Dr. Malcolm Crowe (Bruce Willis), under suggestion of Cole, goes home and talks to his wife Anna (Olivia Williams) while she is lying asleep on a sofa in the living room, as “she would then be able to communicate better with him”.

She talks in her sleep and asks him why he left her, to which he claims he never left her.  Then, unexpectedly, she drops a ring to the floor.  It is then he raises his left hand to reveal HE HAS NO RING ON!  Then, through flashbacks, we come to discover he had been murdered the night he got shot from former patient Vincent Grey (Donnie Wahlberg), at the beginning of the film; he turns around and shows a wide blood stain on his back, thus realizing he had been wandering around as a ghost ever since.

At this time, he also realizes he had completed his pending business: both helping Cole and manifesting his wife how important she always was to him; he then bids her goodbye at the promise of a better tomorrow and passes over. 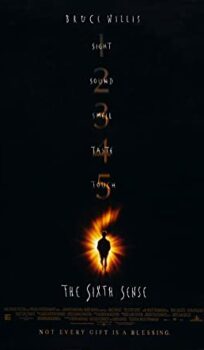