Marilyn Delpy (Rashida Jones) informs Mark (Jesse Eisenberg) that his counsel will be discussing settlements from both cases against him. By having the Winklevoss brothers sign a nondisclosure agreement, Facebook can go on without further defamation by them. She says that the primary reason they are settling is because legal expertise suggests that a trial by jury would not go well for Mark, due to objective perception of his attitude and mannerism as played out in the story.

Mark sits alone with his computer. He notices that Erica (Rooney Mara), the girl he was dating at the beginning of the movie, has made a facebook page, possibly suggesting that she is willing to be Mark’s friend again. He sends a request, then continuously refreshes the page in anticipation of her friend confirmation.

Closing titles say that Mark settled for $65 million to be given to the Winklevoss brothers in exchange for their signature on a nondisclosure agreement. An undisclosed amount was paid out to Edoardo Saverin, whose name was restored publicly as cofounder of facebook.

As of this movie’s release, facebook is valued at over $25 billion. Mark Zuckerberg is the youngest billionaire in the world.

NOTE: Both the girlfriends were psychological dopplegangers for the purpose of the story and the character development. Neither of them actually existed. 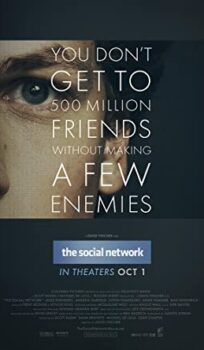