Katie’s 4 sons return for her funeral.

Oldest son is gunfighter John Wayne, and 2nd son is gambler Dean Martin.  They discover that their father was murdered after gambling away title to the family farm.  The law has done nothing about it.  They set out to investigate and avenge their parents.

The sheriff goes out to see the Elder brothers and is killed on the way.  They are framed and arrested. They are being transported to the city for trial.

John realizes there is an ambush and the brothers jump to safety off a bridge as the deputies are killed.  Brother Matt dies in the gunfight and Bud is injured.  The 3 surviving brothers head back to town.  Dean Martin kidnaps Hastings son and brings him to the stable where the brothers are holed up.  The acting sheriff hears Hastings son confess the whole plot, and witnesses Hastings shoot his own son to keep him from saying more.  Hastings holes up in his gun & ammo store, and John Wayne goes in after him.

John Wayne shoots a can of gunpowder setting off an explosion that kills Hastings. 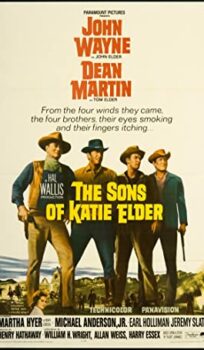