Pooper:
The von Trapp family skips out from under the noses of the Nazis during the Austrian National singing competition, and escapes to Switzerland.

Longer Version:
This is based on the true story of the Von Trapp Family Singers. It takes place in the 1930s.

Maria (Julie Andrews) lives in an abbey and is working to become a nun. While her faith and desire are genuine, she is also frequently derelict in her duties, preferring to run through the fields and enjoy all the bounties nature has to offer (cue “The Sound of Music”). The other nuns wonder what to do with her. Though she would make a decent nun. they suspect that life in a habit may not be what is best for her (cue: “(What do you do with a problem like) Maria”). Ultimately, the leader of the abbey, Mother Abbess (Peggy Wood), decides to send Maria to work as a governess at the opulent Von Trapp Estate. Maria grudgingly accepts the assignment, though she grows more excited as she approaches the Estate (cue: “I have Confidence”).

When she arrives, she meets the now widowed father, retired Austrian military captain Georg Von Trapp (Christopher Plummer). He is incredibly strict, dismissing Maria’s shabby clothes and carefree demeanor. He has seven children, Liesl, Louisa, Friedrich, Kurt, Brigitta, Marta and Gretl. They respond to commands that Georg plays on a tin whistle. Though well-behaved in their father’s presence, they play many mean tricks on their governesses. Maria is no exception, with the children slipping a frog in her pocket and a pinecone on her dinner chair. This behavior led to many of the other governesses departing soon after their arrival. Maria takes it all in stride, slyly  guilting the kids into behaving.

Liesl is the eldest child at the age of 16. She sneaks out of the house to meet Rolfe (Daniel Truhitte) a handsome young boy who works for the telegram company. He briefly mentions that Liesl’s father should be more welcoming to the Nazi regime, whose influence is spreading throughout Austria. They then flirt, with the flirtation ending with a kiss (cue: “Sixteen Going On Seventeen”). A thunderstorm begins raging and Liesl sneaks back into the house, but is caught by Maria. Instead of punishing her, Maria helps her to dry off. The other children become scared by the thunder and soon all of them gather for comfort in Maria’s room. She teaches them how to cope with scary things like the storm (cue: “My Favorite Things”). Georg catches the children out of bed in Maria’s room and disapproves.

Georg leaves the estate to meet his girlfriend, the Baroness Elsa Schraeder (Eleanor Parker). Before he leaves, he gives strict instructions to Maria to tutor the children diligently. Instead, Maria makes them play clothes, takes them out for fun outings, and teaches them how to sing (Cue: “Do-Re-Mi”). When Georg returns to the Estate with the Baroness and their mutual friend, the music producer Max Detweiler (Richard Haydn), he is infuriated to find the children playing . He gets into a fight with Maria and is about to fire her when he hears the children serenading the Baroness with the song “The Sound of Music.” The Captain is captivated by their music and joins in himself. At the end of the song, he embraces all of his children. It turns out his deceased wife used to sing often, but that no music had been heard in the house until Maria came.

The days go by, with Georg having abandoned his strict ways. The children put on a puppet show for the Baroness (cue: “The Lonely Goatherd”) and Georg sings a beautiful Austrian tune (cue: “Edelweiss”). The Baroness convinces Georg to throw a ball in their honor. Georg and Maria dance at the ball, while the Baroness looks on with obvious displeasure. The children go to bed after a well-received performance of a song Maria taught them (cue: “So Long, Farewell”). After the children depart, Georg invites Maria to join the party-goers for dinner. Georg also insults one of the attendees for being a sympathizer of the Nazis, saying he will always stand for Austria. The Baroness, seeing that there is a mutual attraction between Maria and Georg, accompanies Maria to her room. Once there, the Baroness tells Maria that Maria is in love with Georg and that he returns the feeling. Having the intended effect, Maria panics at this news and flees the Estate, quitting her job. The children are sad at her departure, and the Baroness plots to send them to boarding school after she marries Georg.

Maria returns to the Abbey where she takes a vow of silence. The other nuns lament Maria’s morose ways, and the Mother Abbess finally forces Maria to confront her feelings (cue: “Climb Ev’ry Mountain”). Maria leaves the Abbey and returns to the Estate, where she is enthusiastically welcomed back by the children and Georg. The Baroness, recognizing that she can’t stand between Georg and Maria, breaks up with Georg and leaves the Estate. Georg then finds Maria and they express their feelings for each other (cue: “Something Good”). The two then get married and leave on a honeymoon, with Max watching the kids.

When they return, the Nazis have taken over Austria. Max has also signed the children up to sing at an upcoming festival as the “Von Trapp Family Singers,” convinced he can make a mint off of them. Georg is displeased with both developments, ripping the Nazi Flag down from his door and telling Max he doesn’t want his family to become a bunch of singers. Liesl is also distraught to learn that Rolfe now works for the Nazis and has no more interest in her. Eventually, the Nazis inform Captain Georg that he must serve as a commander in the Nazi navy or risk arrest. Unwilling to compromise his beliefs, Georg, Maria and the children attempt to flee the country.

On their way out, they are stopped by a Nazi official who threatens to arrest Georg and force him to relocate to Germany that night. He, Maria, and Max convince the official that they are simply heading to the fair to perform as the “Von Trapp Family Singers.” They are escorted there by the Nazis. The family performs several songs to great acclaim, with the Austrian audience joining Captain Von Trapp in his rendition of “Edelweiss” as a symbol of national pride. The family exits the stage to the song “So Long, Farewell.” Max comes on stage and announces this will be the family’s last performance due to the Nazi’s conscription of Georg, leading to much grumbling by the Austrians. The Von Trapp family wins first prize, but it is discovered that they have run away during the judging ceremony. The Nazis begin a search for the family.

The family is hiding in Maria’s old Abbey. They hatch a plan to drive to the Alps and then hike across them into non-occupied Switzerland, leaving everything behind. The Nazis show up at the abbey and begin looking for the family. Rolfe, as one of the Nazi search party, catches the family leaving the abbey and pulls a gun on them. He eventually lets Maria and the children leave, saying the Nazis only want Georg. Captain Von Trapp talks to Rolfe, trying to convince him to come with the family. He eventually gets Rolfe to lay down his weapon, but when Georg says Rolfe will never be a Nazi, Rolfe blows a whistle to alert the soldiers. Georg flees and jumps into the car with Maria and the kids as the drive from the abbey. The Nazis attempt to follow, but their cars don’t work. Two of the nuns tell the Mother Abbess that they have “sinned,” revealing that they disabled the Nazi cars. Thanks to the nun’s help, the family makes it to the Alps. The film ends with the entire Von Trapp family crossing into Switzerland and thus, able to stay together free from Nazi rule. 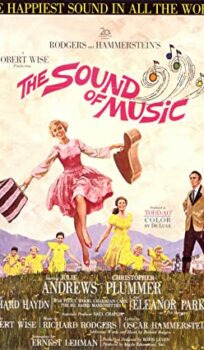