May Munro (Sharon Stone) had made a deal with Ned Trent (James Woods): he would acquiesce to her employing Ray Quick (Sylvester Stallone) to kill the three associates of mobster Joe Leon (Rod Steiger) who killed her parents, even though he is employed by Leon, if she would then deliver Quick into his hands.  But after Quick kills the third victim, Leon’s son Tomas (Eric Roberts), May changes loyalties, and after being forced by Trent to lure Quick into a trap, she and Quick escape to Quick’s hideout.  Trent is able to determine the location of the hideout and descends upon it with what looks like the entire city police force, but Quick has the whole place wired with explosives, and in the ensuing firestorm, Trent is killed and Quick and May escape through a tunnel.  May, having discovered that the man who ultimately ordered her parents’ death was Leon himself, plants an explosive that kills Leon. 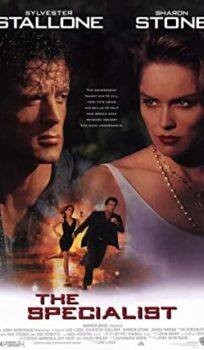