Mrs. Warren (Ethel Barrymore) was wrong in thinking that Steve (Gordon Oliver) is the serial murderer of “afflicted” women–it was Professor Warren (George Brent)! She shoots and kills him as he pursues the mute Helen (Dorothy McGuire), and then suffers an apparent heart attack. She dies in Steve’s arms (asking for his forgiveness). Helen goes to the telephone, overcomes her handicap, and calls for Dr. Parry (Kent Smith). 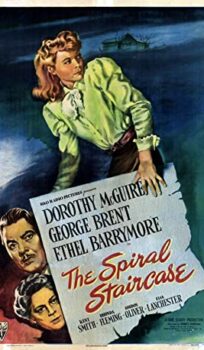