The SpongeBob Movie: Sponge on the Run(2020)

SpongeBob SquarePants’s beloved pet snail Gary is snailnapped by King Poseidon to use his snail slime to keep his face looking young. This was all set up by Plankton to get rid of SpongeBob since he always foils his plans to steal the Krabby Patty formula. With help from Patrick and a robot named Otto, as well as a living tumbleweed called Sage, the young sponge sets off on a journey to the Lost City of Atlantic City to rescue Gary.

In SpongeBob’s absence, business at The Krusty Krab goes under, and both Squidward and Mr. Krabs find themselves missing SpongeBob. When they and Sandy learn about what’s been going on with SpongeBob, they, plus a repentant Plankton, set off to Atlantic City to help their friends after their failed attempt to save Gary has landed them in prison and set up for execution.

The gang makes it to Poseidon’s palace to tell the king how great of a friend SpongeBob is. They then distract Poseidon long enough to grab Gary and almost escape the palace, but after Poseidon has them cornered, he lets Gary go after realizing that SpongeBob has true friends and he doesn’t. With encouragement from SpongeBob, Poseidon vows to change his ways, and he lets go of other snails that he was keeping captive, and everyone returns home to Bikini Bottom. 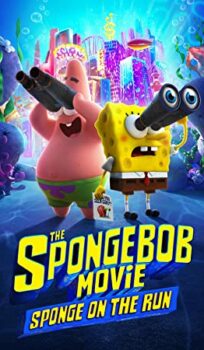