Judge Steven Hardin (Michael Douglas) is a Superior Court judge who just threw out the case of two men accused or murdering a 10-year-old boy on a technicality. The father of the victim tries to kill the defendants, but shoots a policeman by mistake and is arrested. After learning that the father had killed himself while in jail, Judge Hardin goes to his mentor Judge Benjamin Caulfield (Hal Holbrook) to vent his frustration of a crumbling judicial system. Caulfield then tells Hardin about “The Star Chamber”, which is a group of judges that rules on cases in which the obviously guilty defendant is let go for various reasons. If found “guilty”, a hitman is dispatched to kill the defendant. The Chamber has an opening, and Caulfield invites Hardin to fill the seat, which he accepts.

After ruling on a couple of cases, Hardin presents his case of the two accused child murderers. The Chamber finds them guilty and dispatches the hitman. However, Hardin later learns from the detective assigned to the case (Yaphet Kotto) that another man had been arrested and confessed to the crime. Realizing that they just condemned two innocent men, Hardin goes to the Chamber to have the verdict overturned. They tell him that all verdicts are final, and they couldn’t contact the hitman anyway because there is a barrier put in that protects them in case the hit fails. They also warn Hardin not to try to stop it because that could jeopardize the group and they will do whatever it takes to protect themselves. Hardin ignores the warning and goes to find the two men to tell them that their lives are in danger.

Hardin, with the help of the detective, tracks down the two men to an abandoned warehouse. When they find each other, they don’t believe him and suspect that he is there to shut down their illegal drug operation. They attempt to kill Hardin, but the hitman arrives at that time and shoots and kills the two men. The hitman then gets ready to shoot Hardin when he is killed by the detective, who had been following Hardin. The end of the movie shows the Chamber, minus Hardin, ruling on another case, while Hardin and the detective are outside in a car recording their conversations. 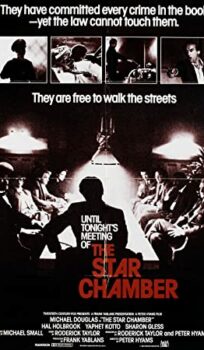