The Strangers are a trio of nomadic serial killers/terrorizers, most likely a family.  They give no reasoning behind their attacks other than “You were home.”  Despite their best efforts to elude them, James (Scott Speedman) and Kristy (Liv Tyler) are caught and tied to chairs.  The three killers proceed to stab them multiple times slowly as Kristy pleads for them to stop.

A short time later, the two boys from the beginning of the movie are stopped by the strangers and the daughter of the trio asks for a Christian Living pamphlet admitting she is  a sinner “sometimes.”  The Strangers drive off to find more victims.  The boys find the house, with James on the floor, most likely dead from his lack of movement and vacant open eyes.  One of the boys find Kristy and she wakes up screaming as the screen goes black. 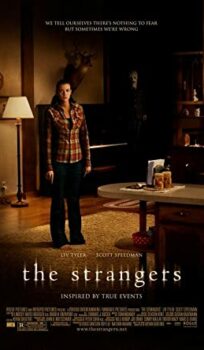