The last of the Dexter Riley movies that Disney made, starring Kurt Russell.

Medfield College is in a budget crisis.  In the science lab, Schuyler is trying to come up with a super cereal, which he is feeding to a cow.  The dean comes in to fire Professor Quigley.  When the dean slams the door, Dexter Riley’s science experiment spills into the cereal.  The cow then produces 80 gallons of milk in one day.  Dexter eats the cereal and gets super strength.  They show the dean.  The dean goes to the Board of Regents, and shows how he gets super strength.  Mrs Crumply (Eve Arden), head of the board, owns Crumply Crunch Cereal Co.  They decide to have a weightlifting tournament against the national champion team.  This will raise money to save the school, and Crumply will get rich selling the cereal.

A rival cereal company sponsors the championship team.  The boss of that company (Phil Silvers) uses his mole, already planted inside Crumply Crunch (Dick Van Patten) and crime boss (Cesar Romero) to steal the formula.  They kidnap Schuyler and get the cereal formula, which does not work.

At the weight lifting tournament, Medfield’s team eats the cereal, but do not get super strength.  Dexter figures out that the cereal tastes wrong, and that it was his mixture spilled in the original cereal that gave super strength.  Dexter races back to the lab and gets his mixture.  By the time he gets back, everyone else has lifted already.  He will need to lift 1,000 pounds for Medfield to beat the total of the champion team.  Of course, he does, so Medfield wins and the college is saved. 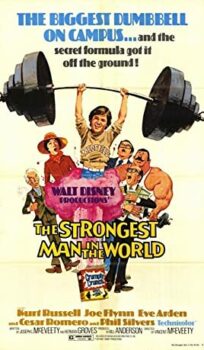