SHORT VERSION:
Through nothing other than sheer stupidity, the Stupids foil Col. Neidermeyer’s contraband weapons deal, which alerts nearby cops who subsequently arrest his men and the buyers. Neidermeyer escapes and confronts the family in their home the next day, but before he can kill them, a Floyd’s Deli delivery man comes barging through the front door with an order Joan had placed the other day (but didn’t realize), slamming the door in Neidermeyer’s face and knocking him out. The Stupids mistake him for a guardian angel working for Lloyd, a planetarium janitor that Stanley and Petunia had met and mistook for God.

The next day, two aliens show up in the Stupids’ backyard planning to kill Stanley over a newspaper article his family accidentally created in his name called “Two Alien Pilots Pick Nose”, which they read while picking their noses. Stanley takes no notice of them, however, for he is teaching Buster how to work the barbecue. He ends up setting the aliens on fire as he does so, and they quickly retreat back to their spaceship and leave the planet.

LONG VERSION:
Stanley (Tom Arnold) gets captured by soldiers working for Col. Neidermeyer (Mark Metcalf) (whom he mistakenly believes are the bodyguards of museum curator Mr. Sender [Robert Keeshan], whom he also mistakenly believes is the leader of a conspiracy to dominate the world by accumulating people’s mail and garbage and ordering the police to kidnap anyone who finds out about it, including children) and brought to the army base. Buster (Bug Hall) witnesses this first-hand, and after telling Joan (Jessica Lundy) and Petunia (Alex McKenna) that “Sender’s men” have captured Stanley, they all head to the army base to get him, but are denied entrance.

Stanley is tied to a chair in Neidermeyer’s office, and Neidermeyer (who mistakenly believes that Stanley is a secret agent) tries to interrogate him on what he knows about his contraband weapons deal, but Stanley knows nothing about it. Neidermeyer then gets told by Lt. Neal (Matt Keeslar) that they have to get to Warehouse 21 to make the deal, so he leaves, in parting telling two of his soldiers to kill Stanley. One of the soldiers spits his chewing gum on the floor, and remembering what the planetarium janitor Lloyd (Frankie Faison) (whom he and Petunia had met and mistook for God) said about how he spends a huge amount of time cleaning up gum that isn’t properly disposed of, Stanley gets angry and breaks free of his bonds and escapes the base. He rejoins his family outside, and they head straight for Warehouse 21.

The Stupids sneak into the place and find Neidermeyer, his men, his buyers, and all of the weapons present. Incorrectly believing that they are all working for Sender, Stanley tells them to turn themselves in and not aid Sender in his quest for world domination, or else they will have to fight him and his family. They all refuse to heed his warning, and the Stupids – through sheer stupidity – then proceed to cause chaos in the warehouse and destroy a lot of the weapons, and the noise alerts nearby cops. As a squad of cop cars arrive and engage Neidermeyer’s men and the buyers in a shoot out, Neidermeyer puts on a Federal Marshal’s jacket and proceeds to frame Neal for everything, and Neal and all of the other bad guys are arrested while Neidermeyer escapes.

The Stupids sneak away from the scene, but then they encounter Sender, who was detoured due to a police roadblock established near the warehouse and is now checking a map to find another road to go onto. Stanley confronts him and tells him that he’s lost, and now he needs to turn himself around, straighten out, and head towards the light, but Sender misinterprets what he is saying for directions and thanks him before going on his way.

When the Stupids return home, they find an armed Neidermeyer waiting for them behind their front door. Before he can shoot them, a Floyd’s Deli delivery man (Harvey Atkin) barges in with an order Joan had placed the day before (but didn’t realize it), slamming the door in Neidermeyer’s face and knocking him out. The Stupids mistake him for a guardian angel working for Lloyd.

While the family is having a barbecue the next day, two aliens show up planning to kill Stanley over an earlier newspaper article authored by him (which Joan and the kids had accidentally made) called “Two Alien Pilots Pick Nose,” which they read while picking their noses. He takes no notice of them, though, for he is showing Buster how to work the barbecue grill, and he unwittingly covers their legs with lighter fluid and then sets them on fire with a discarded match. Terrified, the aliens teleport back to their ship and head back to outer space. 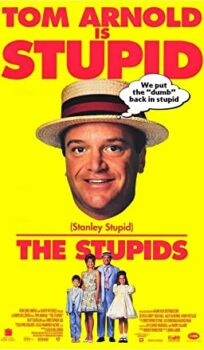