Despite the ever-mounting peer pressure from this miser father “Big Lou” (Vincent Gardenia) to not do a single repair or improvement to the building -at the risk of being disowned-, as well as from the Law, represented in Prosecutor Bensinger (Madolyn Smith Osborne) -whom he was also trying to woo-, Louie (Joe Pesci) gradually grows a conscience and opens up to the lives and squalid living conditions of the tenants of his slum building; even striking a friendship with kind-hearted hustler Marlon (Ruben Blades) and street-smart young Tito (Kenny Blank), who lives with his no-nonsense grandmother Leotha (Beatrice Winde).

One night, Big Lou shows up to take Louie away, ostensibly because “a solution has been found, in his favour”. However, the old man contradicts himself, Louie calls him out on it and Big Lou confesses he was planning to have the building burnt, as a bail-out. Enraged, Louie returns and catches and confronts the arsonist (Anthony Caso) -who had been hired by Big Lou-, with all the tenants coming to back him up. As the guy leaves defeated, Big Lou tries to dismissively explain himself, only to be told off about his condescending attitude towards the underprivileged people who inhabited the building. However, when Big Lou departs looking unimpressed, Louie goes after him and gets him to understand that it is his building and he must do right by those who trust him to provide decent living conditions. Big Lou has a change of heart and proudly embraces his son, supporting his decision.

Time passes. The entire building is revamped and the tenants are heard praising the new amenities Louie has provided everyone with. The day he moves out, everyone is there to send him off and surprise him with what appears to be his beloved Corvette, fully fixed and refurbished. He thanks everyone and drives away.

As he leaves, the crowd disperses, only to reveal that Louie’s actual Corvette -the one that had been completely gutted shortly after he had to move into the building- was still there, sitting on four blocks. The other car’s owner, a big, menacing-looking guy from the neighborhood (William Roberts), comes out, bellowing, demanding to know who took it. The movie ends with a freeze-frame of everyone pointing towards where Louie went. 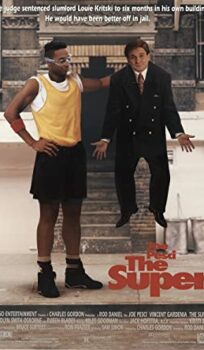