After poison pellets, pesticide, and flamethrowers fail to completely wipe out the killer bees, Dr. Crane (Michael Caine) discovers that the missile base’s sonic alarm system creates a vibration similar to one that the queen killer bee makes during mating times. That was why all of the bees were drawn to the missile base earlier on when the alarm went off, and why they left when it stopped.

With this realization, Dr. Crane formulates a plan. He has the Air Force attach speakers to a few of their helicopters, and then the helicopters fly into Houston, where the bees are. Dr. Crane then plays the sonic alarm on the speakers, and the vibration succeeds in drawing the bees to the helicopters. The helicopters then lead the bees to the Gulf of Mexico, where Dr. Crane had the Army prepare a large oil spill with speakers playing the sound floating around in it. The bees are drawn to the oil, and they land in it and get stuck. The Army then fires rockets at the oil, igniting it and incinerating the bees. 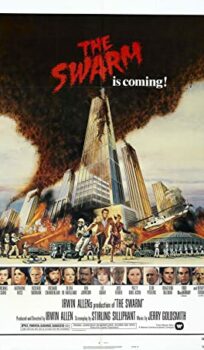