The Taking of Pelham One Two Three(1974)

The Taking of Pelham One Two Three

The heist goes pretty much according to plan until it’s time to emerge from the subway. The gang rigs the subway car to run downtown without a motorman at the controls, set it loose, and the police chase it. Mr. Grey (Hector Elizondo) wants to bring along his machine gun in case there are any police waiting above, so Mr. Blue (Robert Shaw) shoots and kills him. While Blue and Mr. Green (Martin Balsam) are dividing up Grey’s money, Mr. Brown (Earl Hindman) peeks back into the tunnel and is shot and killed by the undercover cop (William Snickowski) who who jumped from the train as it started up again (he was “The Hippie”). Meanwhile, Lt. Garber (Walter Matthau) has figured out the plan, and is rushing back up to 18th Street (the last place the car stopped, where he now realizes that the gang got off). Mr. Blue tells Mr. Green to escape with his share of the cash, and goes back to deal with the undercover cop. Just when it appears that Blue has the upper hand and is about to kill the cop, Garber appears and arrests him. Blue commits suicide by putting his foot on the third rail. Garber and Lt. Patrone (Jerry Stiller), knowing that none of the three dead men knew how to run the train, then go about canvassing the alibis of all the disgruntled former motormen in New York. They interview Green, and suspect him, but can’t search his apartment without a warrant. Just as the police lieutenants are leaving, Green sneezes and Garber recognizes it as the same sneeze he heard in the background during the ransom negotiatons. Busted! 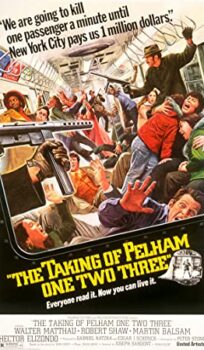