After Frank (Richard Boone) goes to collect the ransom, Brennan (Randolph Scott) is able to make the two remaining kidnappers, suspicious that Frank doesn’t plan on returning, and Chink (Henry Silva) goes off after him, to make sure he doesn’t double cross them. Brennan is then able to kill Billy Jack (Skip Homeier). Chink hears the shot and returns, only to be shot himself.

When Frank returns with the money, Brennan holds him at gunpoint and is able to retrieve the ransom, but is too honorable to kill him, due to owing Frank his life. Frank rides off, but once out of sight, draws his gun, returns, and is shot.

Brennan ends up with Mrs. Mims (Maureen O’Sullivan), who was widowed earlier in the movie. 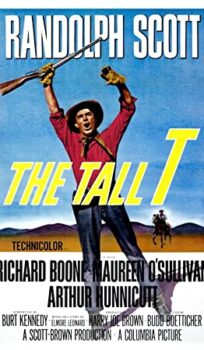