Moses (Charlton Heston) was born a Hebrew but in order to protect him from death, his mother placed him in a basket and sent him down the Nile as an infant, where he was found and raised by Bithiah, sister of King Seti. As an adult, Moses and his cousin Rameses (Yul Brynner) are both in line for the throne of Egypt when the king eventually dies.  Seti favors Moses for the throne and whomever becomes king will also marry the beautiful Nefretiri (Anne Baxter), who loves Moses over Rameses.  Nefretiri finds out from her old servant the truth about Moses’ heritage and while she tries to cover it up in order to protect his future, Moses seeks out his birth mother, Yochabel, a Hebrew slave.  Moses gives up his place in line for the throne to live among the Hebrew people in bondage.

The Hebrews have long since believed that a savior will come and deliver them from slavery.  At Seti’s jubilee celebration, Rameses presents a captive Moses to the king and accuses him of being this savior. Seti at first wants to believe that Moses would never betray him but in the end, Moses is exiled out of Egypt to live or die in the desert.  After weeks of wandering, he comes into the care of a kindly shepherd and his many daughters.  There he finds peace, and a marriage with the eldest daughter Sephora.  As they make their life at the base of Mt. Sinai, Moses goes high into the mountain to find the God everyone has told him about and essentially “sees” him through the burning bush and is given the message by God that he will deliver the Hebrews to freedom.

King Seti dies, Rameses becomes king and marries Nefretiri. At a celebration for the new king, Moses appears with his message from God about letting his people go.  Rameses refuses.  What follows is a series of plagues (locusts, boils, turning the Nile to blood) sent by God but executed by Moses to convince Rameses to release the Hebrews.  The final plague is death to first born Egyptian sons (known today as Passover). Rameses’ son and heir dies and finally, seeing God’s power, agrees to release the Hebrews.

As the Hebrews leave Egypt, a furious Rameses chases after them hoping to kill Moses.  When they get to the Red Sea, Moses parts the water so that the people escape safely and Rameses and his army drown when Moses sends the waves crashing down.

The Hebrews make it to Mt. Sinai and Moses goes back to the mountain again and receives God’s Ten Commandments. However, while Moses is on the mountain for an extended time, the Hebrews start to rebel – committing adultery, creating golden idols because they doubt that Moses is coming back and generally behaving really badly. When Moses comes down from the mountain with the commandments, he is appalled by what he finds and breaks one of them, telling the people that as their punishment they will wander the dessert for 40 years.  And they do. In the end, after the 40 years, the Hebrews make it to the promised land but Moses never steps foot on it. 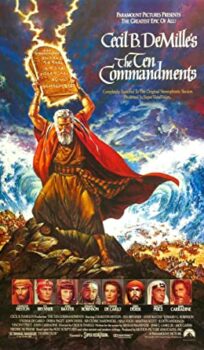