POOPER:
Jess finds a concho from Starr’s gun belt, proving he was responsible for Roy’s murder.  In the ensuing gunfight, Jess kills Starr and all of his henchmen.  He then leaves Rimrock and plans to turn himself in to the US Marshal.

LONG VERSION:
In the lawless Old West town of Rimrock, Arizona, Luke Starr (Broderick Crawford) is the boss.  One night, one of his henchmen is meeting with local newspaper editor Roy Carlin.  The henchman has had enough of Starr’s criminal activities, and Roy has promised him that he will get him and his wife safely out of Arizona in exchange for his testimony and a scoop for the newspaper.  Starr and another henchman come across the meeting and kill both men.  Starr will tell anyone who asks that Roy and the henchman killed each other in a gunfight.  When it’s brought to his attention that Roy never carried a gun, Starr plants one on him.  Several miles away, on the other side of the Mexican border, Roy’s brother Jess Carlin (Audie Murphy) is living a quiet life with his girlfriend Elena as a bounty hunter, capturing outlaws in Mexico and turning them over to American lawmen.  Since he is wanted in the US for various crimes, Jess tells the lawmen that he will continue to turn over outlaws on the condition that the lawmen leave him alone.  The lawmen agree on the condition he never crosses the border.

Jess soon learns of Roy’s death and, knowing his brother never carried a gun, quickly figures that he was murdered.  He decides to go to Rimrock to find the man responsible for his death.  Before leaving, Elena warns him that he will be pursued as soon as he crosses the border, but Jess has already made up his mind that Roy’s killer must be brought to justice.  Jess says goodbye to Elena and heads for the border, and shortly after crossing it, he is met by a couple of bounty hunters.  Jess kills one, wounds the other, and gets away.  In Rimrock, Starr learns of what Jess did to the bounty hunters and tells his remaining henchmen to not take him lightly.  He orders them to kill Jess.  Not long after, three of them find Jess camped out for the night.  They shoot at him, and Jess gets on his horse and escapes.  Since he had removed his horse’s saddle, he had to leave it behind.

Jess arrives at a ranch, and finds a saddle to replace the one he lost.  He leaves some money and is about to put the saddle on his horse when the ranch’s owner, Sandy Adams (Luz Marquez) meets him with a shotgun pointed at his head.  Sandy, who is also a leatherworker, thinks he is stealing the saddle, but when she sees he is about to pay her $40 for a $10 saddle, she let’s him keep it and he rides off.  He later learns that she was engaged to Roy.  Now in Rimrock, Jess is easily recognized by Frank Brady, the man who ran the newspaper with Roy.  He tells him that Roy was the only one in town who stood up to Starr, and after Roy was killed, Starr had the newspaper shut down.  Now that Jess is in town, Frank hopes they can work together to stop him.  Jess is not interested in cleaning up the town, he just wants to find Roy’s killer.  Years ago, he was a sheriff and Roy was the newspaper editor in a corrupt town.  Together, they cleaned it up, but they soon learned that the townspeople were worse than the criminals, and they left town.  Jess doesn’t want to repeat that, and afterward he vowed to never to fire his gun again.  He only picked it up to avenge Roy.

Jess suspects that Starr is involved, but he will need to find evidence to prove it.  Most of the residents of Rimrock don’t like Starr, and one by one they approach Jess with information about him.  One of them is Kit O’Neal (Diana Lorys), the daughter of Starr’s former business partner.  She was willed a piece of their casino, and is working there as a bookkeeper.  Starr shows affection towards her, but is always rebuffed.  Soon, she and Jess begin a relationship, much to Starr’s chagrin.  While he continues to find evidence, Jess is occasionally ambushed by the henchmen, but he is able to get away every time.  Later, Jess learns from the widow of the henchman who was meeting with Roy where they were killed, a wagon train station several miles from Rimrock.  It’s there that he finds a concho from a gun belt.  He takes it to Sandy, and she is able to identify it as belonging to Starr.  This, coupled with seeing that Starr’s gun belt is missing a concho, is the break Jess needs, and he confronts Starr about killing Roy.  Starr finally admits to it, then a gunfight ensues.  Jess, with Kit’s help, is able to kill the henchmen and eventually Starr himself.

With Starr dead, the town needs someone to run it.  Kit pleads with Jess to remain in town, and they can stay together.  Jess refuses, saying that he is taking off his gun belt again, this time for good.  He is also going to turn himself in to the closest US Marshal.  The movie ends with Jess kissing Kit goodbye, then walking off into the sunset, with his gun belt slung over his shoulder. 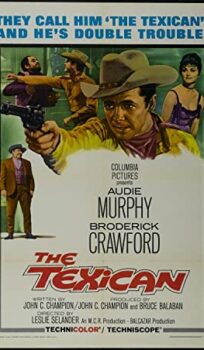