Submitted by Evil Ed (Pooper) and Evan B (Long)

Pooper:
John Carpenter’s remake is more true to the original story “Who Goes There?” This time the alien monster can mimic other life forms perfectly and attacks an Antarctic research station. MacReady (Kurt Russell) and Childs (Keith David) are the only survivors. Since the Thing can assume any form, we never know if the two men are human or not.

Long Ending:
The film begins with a flying saucer crashing into Earth. The film then jumps to Antarctica, 1982. A sled dog runs through the ice and snow as two Norwegian men pursue it in a helicopter. One man shoots at the dog with a rifle and with grenades (unfortunately, the Norwegian is a notoriously bad shot). The dog runs into a compound that is home to an American research team. The Norwegian man yells at the US crew in his native tongue, leaving them befuddled. He accidentally sets off a grenade in the helicopter, blowing it up and killing the pilot. The base’s commander, Garry, shoots the remaining Norwegian after he opens fire on the base while trying to kill the dog.

A bad snowstorm is kicking up, blocking all communications. Dr. Cooper convinces the base’s helicopter pilot R.J. “Mac” Macready (Kurt Russell) to fly him to the Norwegian base. Meanwhile, the men take in the dog, who begins wandering the base in a creepy manner. Cooper and Mac find the Norwegian base completely demolished. They collect some papers and videos they find. While looking through the base, the pair find a huge block of ice that appears to have had something thawed of it. They also find a hodgepodge of corpses burned to a crisp. The men return to their base with the corpses, documents, and video.

When they arrive back to their station, head Dr. Blair (Wilford Brimley) does an autopsy of the charred corpses as the other men look on horrified. Meanwhile, dog-handler Clark (Richard Masur) finally puts the newly-arrived husky into the kennel with the other dogs. After he leaves, the husky begins morphing into a horrific beast and begins ingesting the other dogs in the kennel. Clark is alerted by the commotion and pulls the fire alarm to summon his comrades. They look on at the Thing in terror until Mac gets the head of security, Childs (Keith David) to destroy the Thing (and remaining dogs) with a flame thrower. Dr. Blair soon determines that the Thing was actually assimilating the dogs and, if it had more time, would have become an exact replica of them.

The men realize the dog had been wandering the base for many hours before being placed in the kennel, and any one of them could be an assimilation. Dr. Blair uses a computer program to determine that if the Thing reaches the mainland, it would assimilate all-life on Eath in a few short months. Blair goes crazy and destroys the helicopters and communications system (trapping the Thing on base) and forcing the men to lock him in the tool-shed. Bennings and Windows begin moving the corpses into another building when Drs. Fuchs and Cooper determine the corpse tissue is still alive. They rush to the other building and interrupt the Thing attempting to assimilate Bennings and destroy it with flamethrowers. After watching the videos recovered from the Norwegian base, the men see that the Norwegians excavated the flying saucer shown in the opening (which, as it turns out, crashed thousands of years prior to 1982) and later found and thawed the frozen body of the alien Thing piloting the craft. The cold can’t kill the Thing, so it resuscitated when it was thawed and attacked the Norwegians.

The men decide to test their blood by combining each man’s blood with some vacuum sealed blood kept in storage (theorizing any infected person’s blood would assimilate the untainted blood). They soon discover that the blood freezer was opened and the untainted blood destroyed. As only commander Garry and Dr. Cooper had access to the blood storage, they are relieved of duty and Mac takes over. Soon, however, Fuchs disappears. They find that he has burned himself alive after having apparently been attacked by a Thing. Mac and Nauls go to Mac’s quarters to investigate a light that was mysteriously on, and Nauls soon runs back to the base and locks Mac out, claiming that Mac is a Thing. Mac manages to break into the base and acquires TNT, threatening to blow up everything if they don’t let him back into control. A fight breaks out as nobody trusts Mac anymore. During the struggle, Norris has a heart attack. Dr. Cooper tries to resuscitate him, but is fatally attacked when it turns out Norris was actually a Thing. Mac grabs a flame thrower and torches Norris’ body. To everybody’s horror, Norris’ head melts off, sprouts legs and antenna, and tries to flee. Mac torches the head too.

Having the flame thrower, dynamite and a gun, Mac forces everyone into the living area. He is attacked by Clark and shoots him dead, thus ensuring compliance by the rest of the group. After seeing Norris’ head separate from the body and flee, Mac theorizes that each cell of the Thing is sentient. Thus, to test the men, he takes blood from each of them (including himself), heats an exposed copper wire, and dips the hot copper into the blood. To everyone’s surprise, Palmer’s blood reacts violently to the heated wire and he unveils himself as a Thing, killing Windows. After they burn Windows and Palmer, Mac releases Nauls, Garry and Childs after the test reveals they are still human. Mac has Childs guard the base while he Nauls, and Garry go to the tool shed to test Dr. Blair. They find that Dr. Blair has escaped and also uncover that he had been assimilated and used the radio and helicopter parts they thought he had been destroying to try and build a new spacecraft.

The Blair/Thing shuts off the base’s generator and Mac deduces Blair/Thing’s plan is to freeze everyone to death (including itself) and then resuscitate when a rescue team eventually comes to the base. They also see Childs running through the cold night and assume he has been assimilated by Blair. Knowing that they can’t let the Thing reach the mainland,  they begin blowing up the base, hoping to smoke the Thing out (and they also blow-up the spaceship Blair was building). Blair separates and kills Garry and Nauls. It then attacks Mac, but Mac manages to set off some dynamite and blow up both Blair/Thing and the main base. Mac somehow survives the blast and sits down in the snow. Childs comes out of the darkness and sits next to him. Childs claims he had simply thought he had seen Blair running outside and went to pursue him before getting lost in the snowstorm. It is clear that neither man believes the other is human. Childs notes that the smoldering ashes of the base won’t keep them warm forever, and Mac responds that they will just have to wait to see what happens. The film fades to black, with very little likelihood that either will survive the cold night, nor a resolution of whether either (or both) have actually been assimilated. 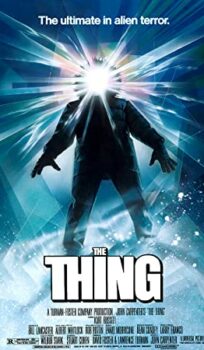