The Thing from another World(1951)

LONG VERSION:
Scientists are at a remote Arctic research station in Anchorage. A strange aircraft has crashed nearby, and they want Air Force assistance in approaching it. When they all go out to investigate, they found a round flying saucer that has crashed with great force, and is embedded deep in the ice. They attempt to dislodge it with explosives, and end up igniting the fuel, with complete destruction of the spacecraft. However, nearby they find the body of the alien pilot encased in ice. They cut out the surrounding ice block, and bring the alien in ice back to the research station.

The plan is to leave it frozen on ice until senior officials arrive to take it back for study. One of the guards can not stand to look at the alien, so he covers it with a blanket. He does not realize it is an electric blanket, which soon melts the ice, releasing the alien. It turns out the alien is still alive, and he is angry. He escapes and begins to kill sled dogs, feeding of their blood. The soldiers and scientists attempt to battle the creature. They discover the creature is a form of intelligent mobile plant life. It can not be injured by bullets, knives, cold etc… It can regrow any body part that is cut off. They finally decide that if it is a vegetable, they should try cooking it. It is injured by the heat, but not killed.

They know it will eventually come for their blood. They set a trap in the entry hallway, with a super electric circuit to cook the creature. The head of the research station, Dr Carrington, realizes that every 1950’s B-movie has to have an insane scientist who wants to study the deadly creature and interfere with the heroes. Dr Carrington takes on that role and his actions lead to the death of 2 airmen. He turns off the generator supplying electricity to the electric cooker, which will allow the creature to enter and kill them all. They shoot Carrington and restore power, just in time to kill the creature.

The famous last line of the movie is that this is just the first wave of an invasion, and we must, “Watch the skies, everywhere! Keep looking. Keep watching the skies! 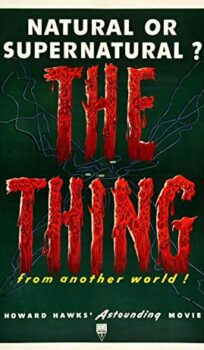