The Three Faces of Eve

Eve (Joanne Woodward) has Multiple Personality Disorder. Her first personality is Eve White, a quiet housewife. She then realizes the existence of Eve Black, a vampy “wild girl.” Later in the movie a third personality emerges — “Jane,” who is more normal and sane. At the end, Eve remembers a day when she was six years old and she was forced to kiss her grandmother’s corpse at the funeral “to say goodbye” — this is what caused her personality to split. After this the two Eves go away and Jane lives a normal life. 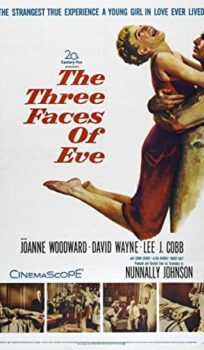