In a small western town, the sheriff has been killed and his young deputy, Ben Owens (Anthony Perkins) is named temporary sheriff.  Owens desperately wants to be named permanent sheriff, but he is young and inexperienced and is in way over his head.  His girl refuses to marry him because she is sure he will get killed as sheriff.

Hickman (Henry Fonda), an older bounty hunter, shows up in town.  The town council wants to run Hickman out of town.  Since he is refused a hotel room, Hickman stays with Mrs Mayfield, a widow with a young son.  Owens asks Hickman to teach him to shoot, fight and be a sheriff.  Among other things, Hickman teaches him that being a quick draw is nonsense.  The guy who shoots first usually shoots too fast and misses.  The guy who takes time to hit his target walks away alive.  He also learns that, in a confrontation, he has to watch the guy’s gun hand, not his face.  Hickman warns him  that all the “good citizens” who support him will disappear when there is danger or need for help.

The popular town doctor is murdered by Ed McCaffey (Lee Van Cleef).  Owens tries to form a posse, but it turns into a mob led by the town bully Bogardus (Neville Brand).  Hickman helps Owens bring Zeke and Ed McCaffey in alive, to stand trial.  Bogardus tries to rally his mob to lynch the McCaffey brothers.  With Hickman’s coaching, Owens stands up to the mob.  Bogardus tries to shoot Owens, but Owens shoots him down.

The town hires Owens as permanent sheriff.  The girl sees that Owens can handle himself as sheriff and agrees to marry him.  Mrs Mayfield leaves town with Hickman to start a new life. 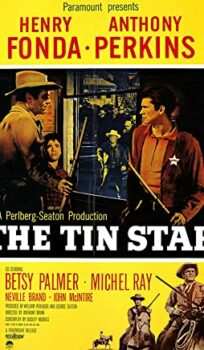