Pooper:
Brandy achieves everything essential on the list and finally loses her virginity to Rusty Waters. She makes up with everyone she hurt, and she eventually has sex with her friend Cameron (who had feelings for her) when she gets to college and has her first orgasm, which was also on the list.

Long Version:
Brandy Klark (Aubrey Plaza) gets drunk at a high school graduation party for the first time and almost loses her virginity to her crush Rusty Waters (Scott Porter), but ruins it with her nervousness as well as the fact that they were in a dark room and Rusty thought she was someone else. Realizing that sex is basically the only thing she is inexperienced in, she creates a “to-do list” of various sexual activities to achieve with the end goal of finally having sex with Rusty.

While working through the list Brandy inadvertently upsets her friend Wendy by trying dry-humping and hickies with Duffy who was her ex-boyfriend who she still has feelings for. She scares her father who is deeply conservative and afraid his liberal wife will encourage Brandy to have sex. She also breaks the heart of Cameron who she tried a few things with but did not realize he had feelings for her and that she was accidentally leading him on (despite deep down having some small feelings for him). Eventually Brandy attracts enough attention from Rusty and sleeps with him as she had planned, but it is brief as Rusty does not last very long and Brandy also spots her parents having sex in the car next to them and is mortified. Brandy comes to the realization that having sex is not that big of a deal unless emotions are involved and apologizes to Cameron but tells him she still does not want to date him, and she tells Rusty it was a one-time thing but she won’t regret it. She also makes up with her friends, reconciles with her conservative father, becomes friends with her boss Willy (Bill Hader) and successfully encourages her sister Amber to find her own way in life without a man.

Away at college in the fall Brandy runs into Cameron and they decide to have casual sex (not a relationship) where Brandy achieves an orgasm (one of the only things left on the list). The film ends with her father walking in on them as he is visiting for “father’s week” (or at least that is what his sweater says). 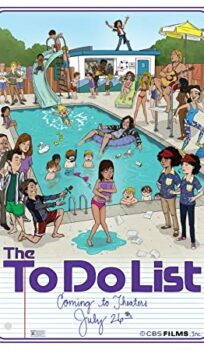