Former Army Ranger and biology teacher Dan Forester (Chris Pratt) is recruited to fight in a war 30 years in the future, where a deadly race of aliens known as the Whitespikes has reduced the world population to below 500,000.

In the future, he meets his daughter Muri, now grown, who develops a toxin that can kill the Whitespikes and stop them from reproducing. She is killed before she can put it to use, but she gives it to Dan who takes it back to the present.

Dan discovers that the Whitespikes landed in a spaceship in the Arctic hundreds of years ago and only attacked in the future after thawing out due to global warming. He leads an expedition to Northern Russia that includes his father (JK Simmons) and Charlie (Sam Richardson). There, they find a spaceship buried beneath the ice with a deceased alien pilot and hundreds of Whitespikes in the cargo bay.

Charlie uses explosives to destroy the ship, but one female Whitespike escapes. Dan and his father chase it down, and in a climactic battle, Dan manages to inject it with the toxin, killing it and preventing the war in the future. 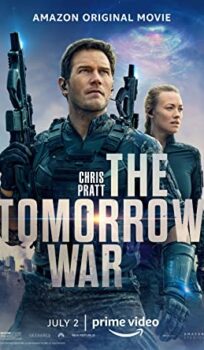