The Town that Dreaded Sundown(2014)

*Based on the true story of the Texarkana Moonlight Murders committed by the Phantom Killer between February 22 and May 3, 1946 in Texarkana, Arkansas and the surrounding areas. The case remains unsolved.

Captain Morales (Ben Johnson) and Deputy Ramsey (Andrew Prine) get a radio call about a stolen car found at the edge of a wooded area, and after hearing the car’s description, Ramsey recognizes it as the same car that he saw the Phantom Killer drive off in after he murdered two victims. When they reach the car’s location and Ramsey confirms it as the one the killer had driven, Morales orders the officer there who found it to radio Sheriff Barker (Robert Aquino) and tell him to stand by with the bloodhounds. He and Ramsey then grab their shotguns and head off into the woods to find the killer.

They find him at the edge of a sand pit, and he runs after Morales fires a shot at him and misses. They chase him to a set of train tracks just as a train is steaming past, and the killer gets on the other side of it. Morales and Ramsey start shooting underneath the train, and a shot from Morales hits the killer in his left leg. When the train finishes its pass, they find that the killer has vanished. Morales gets the bloodhounds out to search the area, and the killer is last shown limping through a bayou, escaping them.

The narrator says that the bloodhounds quickly lost the scent, and the killer was never seen nor heard from again. Some townsfolk speculate that he still lives in the town and is walking freely amongst them.

The narrator states that (as of 1977) Captain Morales spent the next decade searching for the Phantom Killer. He eventually retired from the Texas Rangers and now lives in Dallas. Police Chief Sullivan (Jim Citty) was re-elected for three more terms, and he retired and died in 1970. Sheriff Barker was also re-elected for several terms, and he never stopped working on the case until his death in 1966. Helen Reed (Dawn Wells) – the last victim – recovered from her attack, and she lives a normal life in Texarkana. Sammy Fuller (Mike Hackworth) and Linda Mae Jenkins (Christine Ellsworth) – the first two victims – moved away from Texarkana, and their whereabouts are not known. Deputy Ramsey spent the rest of his life as a fine police officer before he died in 1973. 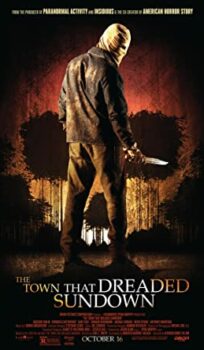