Towards the end of the Fenway Park heist, Doug (Ben Affleck) notices how eerily quiet the surroundings are, and, peeking through one of the windows, realizes there is a huge Police/FBI contingent awaiting them.  Moreover, some SWAT members catch a glimpse of them and a shootout starts.  Dez (Owen Burke) is the first to die; then, Gloansy (Slaine) sacrifices himself creating a diversion for Jem (Jeremy Renner) and Doug to escape: he drives the ambulance, gets shot and dies when he crashes into a police vehicle.

Jem and Doug manage to sneak out of the stadium with the money, but FBI Agent Frawley catches up with Jem and tries to arrest him.  Jem fights back by starting another shootout, but ends up being killed.  Doug witnesses this and escapes unnoticed in a police cruiser.  Then, he goes to Town Flowers and kills both Fergie (Pete Postlethwaite) -out of retaliation for what he did to Doug’s parents- and his henchman.

Doug then calls Claire (Rebecca Hall) to convince her to leave town with him, but feels disappointed when he sees the FBI is with her -he can see her from across the street-; however, she secretly tips him, thus letting him know she cared about him, which satisfies him.

Frawley and his team prepare themselves for the potential arrival of Doug, which never happens; he realizes that Claire had indeed warned him.  Meanwhile, Doug dresses up as an MBTA driver and uses a public transportation bus to get to South Station and catch a train headed south.  In the end, Claire discovers a bag full of money with a note -in which he states how much he hopes to reunite with her one day-, buried in the Community garden, and a tangerine, as a hint of him being probably in Florida.  She ends up using the money to help have the Community Ice Skating Rink renovated for the children to play at, “in memory of Doug’s mother”.

The last shot shows Doug overlooking a river from a porch. 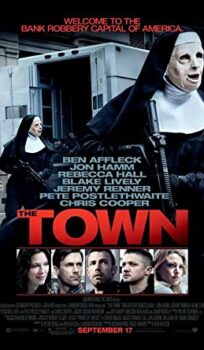