Emanuel (Kaya Scodelario ) tries to keep everyone from finding out that Linda’s (Jesscia Biel)’s baby Chloe is in fact just a doll. Emanuel goes so far as to push away Claude (Aneurin Barnard) the boy she has feelings for, rather than have him work for Linda and discover the truth.

However Linda goes out on a date with Emanuel’s co-worker, and when they come home that night Linda takes him up to meet her baby. He of course instantly realizes that it’s just a doll. When he points this out to Linda, she gets hysterical, believing Emanuel has done something with the real Chloe. As both Linda and the co-worker demand to know where Chloe is, Emanuel clutches the doll to herself and falls to the ground. She has a vision of swimming deep in the ocean (just like the dream her mother had the day she died), and the doll turns into a real baby and swims off to meet Emanuel’s mother and the two swim away, leaving Emanuel alone.

The police soon clear up the whole issue. Linda’s husband arrives and explains that after the real Chloe died and their already broken marriage continued to crumble, Linda began the delusion with the doll and then ran away after he tried to have her committed. He has now put Linda in an institution but says the doctors are not hopeful that she will recover.

Emanuel appears to be a little more open to her step mother, after the step mother sympathizes with Linda and shares her own grief of being unable to have children.

After her father refuses to help Emanuel see Linda, Emanuel goes to Claude with whom she has made up, and he helps her break into the hospital where Linda is being held. Emanuel in turn breaks out Linda and takes her to own mother’s grave where Emanuel has never been before. Together, the two burry the doll of Chloe and then lie side by side on the grass looking up at the stars. 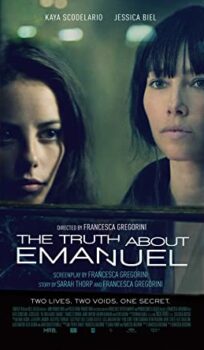