The army of newborn vampires (newly made and uber-powerful) has been raised by Victoria (Bryce Dallas Howard) in order to kill Bella (Kristen Stewart) despite her protection from the Cullen coven. Victoria wants revenge for Edward (Robert Pattinson) killing her partner in the first film, and wants him to experience watching his lover die in return.  Instead of facing off with her army by themselves, the Cullens join with Jacob’s (Taylor Lautner) Quileute pack, despite the bad blood between the two groups, and together they destroy the army. Edward finally kills Victoria.  The Volturi, who knew about both the army and planned attacks and did nothing to stop it, show up afterwards and kill a young newborn the Cullens had offered sanctuary to.

Edward finally gets Bella agree to marry him, and she continues ahead with her determination to have him turn her after graduation.  Edward and Jacob become, if not friends, at least less adversarial towards each other, and Jacob tells Bella he will continue to wait for her – even if she becomes a vampire. 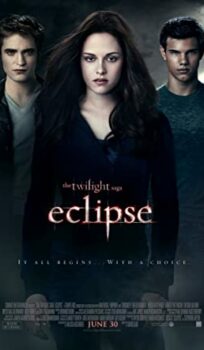