On Bella’s (Kristen Stewart) 18th birthday, while celebrating with the Cullens, she gives herself a paper cut when opening a gift and Jasper goes crazy and tries to attack her.  She winds up with some injuries and Edward (Robert Pattison) decides that it is too dangerous for Bella to be with him so he and the Cullens decide to leave Forks.  Bella goes into a deep depression, ignoring her friends and suffering from terrible nightmares.  However, she realizes that participating in dangerous or reckless activities allows her to see visions of Edward, which fuels her along. She buys two dirt bikes and starts spending a lot of time with Jacob Black (Taylor Lautner) who helps her fix them up.  Jacob falls in love with Bella and while she loves him as well, it is strictly platonic for her.

Victoria (Rachelle Lefevre), the vengeful vampire from the first movie, is still after Bella for killing her mate and Jacob, along with other young men from the Quillet tribe, are actually werewolves who protect humans from vampires.  Bella learns about the werewolf pack and accepts Jacob and his friend’s help to protect her from Victoria. However, on a whim and in order to “see” Edward again, Bella cliff dives. Victoria sees Bella unconscious in the water and tries to reach her but Jacob rescues her first.  Bella also learns that Harry Clearwater, her father’s friend, has died from a heart attack.  She and Jacob return to her house and find Alice Cullen (Ashley Greene) there.  Alice “saw” Bella jump off the cliff but didn’t see her being rescued by Jacob because she can’t “see” the future with the werewolves around.  Alice thought Bella committed suicide.  Jacob doesn’t like that Alice is back in Forks and tries to talk to Bella.  Just as he is about to kiss her, Edward calls asking for Bella’s father Charlie (Billy Burke) and Jacob tells him that “he is planning a funeral”.  Edward thinks that Bella is dead and Alice sees a vision of the future where Edward provokes the ancient vampire order, The Volturi, in order to die as well.  Alice and Bella take off to Italy to save Edward, leaving Jacob behind, heartbroken.

During a town festival, Edward plans to reveal himself in the sunlight in front of thousands, hoping to provoke the Volturi enough to kill him so he can be with Bella.  Just as he steps into the light, Bella rushes to him, revealing that she is still alive and saving him from exposing himself.  However, it is too late.  The Volturi summon Alice, Edward and Bella to their chambers.  In order to prevent Bella from being killed or harmed, Alice shows the Volturi her vision of the future – Bella as a vampire. They allow the trio to return to Forks with the condition that Bella be turned soon.

Back in Forks, Bella is ready to be turned but Edward hesitates. Bella takes a vote among the Cullens and all but Rosalie and Edward vote to change her.  Jacob approaches Edward and reminds him that it is against their treaty for any vampire to bite a human.  Bella has a moment with Jacob and tells him that while she loves him, Edwards is the one she is in love with and she’ll always choose him.  Jacob runs off devastated by her choice.  Edward agrees to turn Bella himself after graduation on one condition, that they get married first. 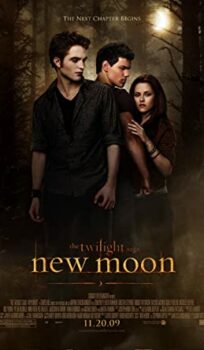