The Umbrellas of Cherbourg(1964)

After Guy (Nino Castulnuovo) leaves for the Army, Genevieve (Catherine Denueve) finds herself pregnant. A wealthy diamond merchant offers to marry her and raise the baby as his own. Genevieve’s mother pressures her to accept the proposal, and Genevieve does indeed marry the diamond merchant. Guy returns from his stint in the army to find Genevieve moved away. He is crushed but eventually marries and has a family of his own.

Years later, Genevieve, now a wealthy housewife, is driving through a gas staton with the daughter she had with Guy. She finds that Guy is the owner of the gas station. The two of them have a brief and awkward conversation. Genevieve asks Guy whether he wants to see his daughter. He says no. Genevieve drives off, and Guy plays with his wife and son. Snow falls, perhaps symbolizing the cold final outcome of the love story between Guy and Genevieve. 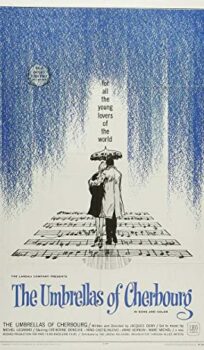