The Zachary family of western pioneers includes the mother, brothers Ben (Burt Lancaster), Cash (Audie Murphy) and Andy and youngest daughter Rachel (Audrey Hepburn).  The father is dead and Ben is the head of the family.  Cash is extremely offensively prejudiced against indians. An old drifter shows up spreading rumors that Rachel is indian.  Ben is the biggest strongest man around and makes it clear that anyone hinting at that is in for a beating.

Neighbors capture the drifter and put a noose on his neck to scare him into telling the truth.  He insists that he was there when the Zachary father took the baby after raiding an indian village.  The mother kills the drifter to keep him from saying any more.  The neighbors all turn against them for harboring an indian.  The local Kiowa chief believes the girl is his sister who was stolen.  The Kiowas have their history written on horsehide which shows that in the summer with many shooting stars, she was stolen.  That is when Rachel arrived.  Confronted with this evidence the mother admits to her sons that Rachel is a stolen indian baby.  The boys had been told that she was an orphan from settlers that were killed by Kiowas.

Cash is furious and wants Rachel thrown out.  He abandons the family when his brothers refuse.  The Kiowas come back to demand the return of Rachel.  Although they come under a flag of peace, the brothers shoot at them.  This launches an all out battle.  The brothers are secure in the cabin and seem to be holding them off.  Ben reveals that he loves Rachel, and wants to marry her when this is over.  Mother gets shot and killed.  The Kiowas stampede cattle to destroy the cabin, just as the ammunition is running out.  It appears they are finished, when someone starts shooting from behind the Kiowas.  It is Cash who has returned.  The Kiowas are driven off.  Ben, Cash, Andy and Rachel are left staring at one another beside the destroyed cabin. 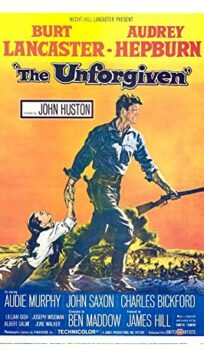