All but the two of the inner-four of “The Untouchables” survive the attempts of jailing mob boss, Al Capone (Robert DeNiro):  Oscar Wallace (Charles Martin Smith) is shot in the head when escorting a witness in the service elevator.  Jim Malone (Sean Connery) is gunned down in his home by the same man who killed Wallace.

Eliot Ness (Kevin Costner) and George Stone (Andy Garcia) track down Capone’s book keeper, who can directly connect Capone to tax evasion.  During the trial, Ness notices a man, Frank Nitti (Billy Drago) (the man who killed Martin and Malone) talking to Capone, and is wearing a gun.  Ness and the bailif escort him outside only for him to shoot the bailif and flee to the roof.  Just when Ness has him cornered and you think that he is going to shoot him dead, his feelings towards upholding the law kicks in and decides to arrest him instead.  As Ness is handcuffing Nitti, Nitti begins to brag how he killed Malone and how he will go free.  It is then, Ness changes his mind about the law, and decides to take revenge instead, throwing Nitti off the roof.

Back at the trial, Capone attempted to bribe the jurors so the judge requests to switch the jury with another one.  This calls out Capone’s corruption when his attorney wished to change the plea to guilty.

In the end, Capone ends up being sentenced to 11 years in prison.  With all the commotion within the courtroom, Capone looks over and spies Ness smiling at him in victory.

When Ness decides to leave Chicago, a reporter interviewing him mentions the rumors of the repeal of prohibition and asks him what he intends to do if this is true.  Ness simply replies, “I think that I’ll have a drink.” 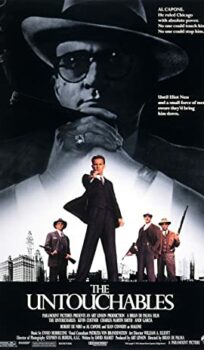