SHORT VERSION:
Bobby ends up giving the money for his first installment on the van to Andy so he can cover a high-risk bet he lost, and though Andy promises to repay him, he doesn’t have the money at the time Bobby needs it. Feeling like he has no other choice, Bobby decides to challenge his nemesis Dugan to a $200 winner-take-all drag race. His new love Tina is dead-set against the idea, having earlier witnessed a drag race that went badly, but Bobby is keen on keeping his van, so she refuses to come and support him.

Just as Bobby and Dugan start their race, Andy shows up with the money he owes, so he follows them in his car. Tina also arrives, having changed her mind, and she follows right after Andy. Dugan tries to run Bobby off the road, but blinded by his anger, he fails to notice a police cruiser up ahead driven by the two bumbling officers that have had their cruisers smashed up more than once during the movie due to incidents that Bobby was directly and indirectly involved in. He T-slides into their car while Bobby rolls his van over onto its hood. He thankfully emerges perfectly fine, as well as the winner, having crossed the finish line.

Bobby gets his money from Andy and then drives home with Tina in her car.

LONG VERSION:
One day, Andy (Danny DeVito) comes into the pizza place that Bobby (Stuart Getz) and Jack (Harry Moses) frequent and tells them about how he got beat up for not paying for a winning high-risk bet, so Bobby gives him the money he has set aside for an upcoming installment on his van to cover it. That night, he goes to Tina’s (Deborah White) house to talk to her, but she wants nothing to do with him, due to him having made an attempt to get physical with her the day before. However, she watches him as he drives off. Bobby then pays his long-time crush Sally (Connie Lisa Marie) a visit, during which she confesses that, though she loves Dugan (Stephen Oliver), she feels abandoned by him and wishes that someone would stick it to him just once. Bobby ends up having sex with her in his van (during which she comments that he is more well-endowed than Dugan), but after they finish, they hear the horn of Dugan’s van. Sally runs back into her house while Bobby takes off, but Dugan sees him departing. Bobby and Tina both spend all night and the following morning thinking about each other.

Bobby and Tina meet up at the pizza place later on and find Jack and Sue (Marcie Barkin) already there, but Dugan comes in and tells Bobby that he saw him at Sally’s last night. He looks to put a pounding on him, but Jack distracts him from doing so. Tina attempts to leave while telling Bobby she never wants to see him again, but Bobby refuses to let her go away so easily this time, forcing her into his van and driving off with her. He takes her on a wild ride until she agrees to hear his side of things, and he stops at a scenic spot. He admits to her that he was clueless when it came to women, so he bought the van hoping to be able to score with a lot of them, but now that he’s met her, he doesn’t want to play that game anymore. Tina admits that she, too, could not play “the game”, either, and they end up having sex.

The next day, Bobby finds out from Andy that he doesn’t have the money to repay him. Knowing that the dealership will take back the van if he is late with the installment, Bobby tells Jack to find Dugan and tell him that he will do a $200 winner-take-all drag race with him tomorrow. Tina, who is with them, is dead-set against this idea, due to having seen a drag race earlier on that went badly, but Bobby is keen on keeping his van.

The next day, Bobby and Dugan meet up to race (which Tina initially no-shows and Bobby appears intoxicated), but as they are revving their engines, Andy shows up with the money he owes. Unfortunately, they speed off right after, so Andy follows them. Tina then appears and follows right behind Andy. Dugan tries to run Bobby off the road, but blinded by his anger, he fails to notice the police cruiser up ahead driven by the two bumbling officers (Chuck Hastings & Steven Stinebaugh) who have had their cruisers smashed up more than once during the movie due to incidents that Bobby was directly and indirectly involved in. Dugan T-slides into their car while Bobby’s van ends up rolling over onto its hood. Tina, Jack, and Sue rush over to check on Bobby, and he thankfully emerges alive and unharmed, as well as the winner, having crossed the finish line. Andy hands Bobby the cash, and Dugan pouts, knowing that the officers will put him under arrest, and the officers start crying because they were warned that they were finished if they wreck this car.

Bobby leaves with Tina in her car, and she asks him if he really did sleep with Sally. He tells her he did, and that she said he was more well-endowed than Dugan, and she just laughs. 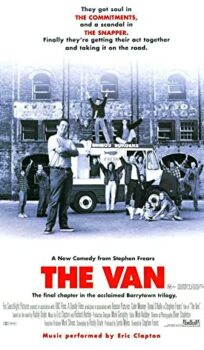