While taking candles to church, Karin is raped and murdered by two herdsmen as a younger herdman looks on. The herdsmen then unknowingly seek shelter at the home of Karin’s parents where they try to sell some of Karin’s clothes to her mother. Her father, Max Von Sydow, locks down the house and proceeds to kill all three of them. Max Von Sydow then says that although he does not understand God, he will build a church at the site of his daughters murder. Karin’s parents find her body and when Max Von Sydow lifts her head, a spring flows from the ground. 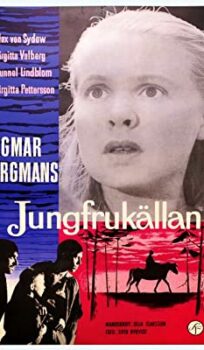