POOPER
Philippe successfully walks on the wire between the Twin Towers of the World Trade Center six times.  He decides to stay in New York, but Annie returns to Paris to find her dream.

LONG VERSION
Set in 1973 and based on a true story, French street performer Philippe Petit (Joseph Gordon-Levitt) is doing his juggling act on the streets of Paris to make money.  He is also a novice wire-walker, and he is constantly looking for a place to hang his wire and walk across it.  One day he is at the dentist office when he sees a magazine article about the soon-to-be completed World Trade Center in New York.  Philippe sees the Twin Towers and decides that is where is wants to hang his wire and walk across it, even though it would be illegal to do so.  He calls the venture his “artistic coup”.  After he is kicked out of his parents home for not getting a “real” job, Philippe goes to the circus that inspired him to be a wire-walker and tries to practice on their highwire, but is caught by the owner, Papa Rudy (Ben Kingsley).  Rudy is impressed with Philippe’s juggling skills and agrees to teach him how to be a true wire-walker, but the mentorship is short-lived and Rudy soon kicks him out.  Now living on the streets of Paris, Philippe meets another street performer, a musician named Annie (Charlotte Le Bon), and the two soon begin a romantic relationship.  Philippe tells her of his dream of wire-walking between the Twin Towers, and Annie gives him a place to live and practice at the art school she attends.  He begins to call her his accomplice in his coup.  One day while practicing, Philippe meets a photography student named Jean-Louis (Clement Sibony).  They quickly become friends and Philippe’s second accomplice.

Philippe goes back to Rudy and begs him to teach him everything he knows about wires.  Rudy reluctantly agrees, but wants Philippe’s daily juggling money as compensation.  He is also back to practicing on the circus’ highwire, and nearly falls off when he tries to step off.  Rudy tells him, for free, that is the most dangerous part of walking a wire.  Soon, Philippe is able to book his first public wire-walk over a small lake during a town festival.  It starts off well, but he is distracted by the crowd and falls into the lake.  To redeem himself, Philippe decides to walk between the towers of the Notre Dame Cathedral.  He and Jean-Louis are able to sneak into the cathedral at night, attach the wire to heavy balls that are thrown from one tower to the other, and after the wire is connected, Philippe climbs on the wire at first light and begins to walk across.  The walk is a success, but Philippe is arrested as soon as he gets off.  Philippe, now feeling redeemed, decides it’s time to go to New York, so he and Annie fly there and get their first look at the towers.  When Philippe realizes just how tall 110 stories actually are, he begins to have second thoughts about the walk.  But he decides to climb to the top of the not yet completed South Tower (no one is there to stop him), and looks out to the North Tower, and he is now re-determined to make the walk.

Now back in Paris, Philippe, Annie, Jean-Louis, and Papa Rudy are figuring out how to get the wire between the towers, how to attach them, etc., when Rudy suggests that Philippe wear a safety wire.  Philippe absolutely refuses to do this, and tells Rudy that doing so would be cheating the audience.  Rudy reluctantly agrees, and gives him back all of the money he took for the lessons, saying his secrets are now our secrets.  Later, Jean-Louis introduces Philippe and Annie to his new friend Jeff (Cesar Domboy), who doesn’t speak English and is afraid of heights.  But since he is the one who helps come up with the idea of shooting an arrow from one tower to the other to get the wire across, Jeff becomes the newest accomplice.  Philippe also chooses the date to do the walk:  Monday, August 6, 1974 (the weather is still warm and construction won’t be finished yet).  Philippe and Annie travel to New York and begin their reconnaissance of the World Trade Center.  Disguised as a construction worker, Philippe scouts locations to place their equipment ahead of time and the work patterns of the construction workers.  One day, while doing his reconnaissance, Philippe accidentally steps on a nail, jeopardizing the walk.  Despite the injury, Philippe continues his spywork, this time as an injured tourist.  Philippe still doesn’t know how to get to the top of the completed North Tower, but good luck strikes when he meets Barry Greenhouse (Steve Valentine), an insurance agent who works on the 82nd floor.  He was in Paris the day Philippe walked the wire across the Notre Dame Cathedral and was impressed by the accomplishment, and is now the newest accomplice.

After recruiting three more accomplices, the big day is the next day.  Philippe is going over the plan for the umpteenth time so everyone understands their role.  The main thing is that Philippe must be on the wire by 6am, because the construction workers arrive at 7am.  But that night, shortly after beginning the plan, things start to go wrong.  An unexpected construction delay causes them to start late.  Upon reaching the roof, one of the new accomplices, high on drugs, wigs out and abandons the group.  A security guard shows up at an unscheduled time, forcing the group to hide and delay them even further.  While hiding, Philippe sees his foot is bleeding again.  When the guard finally leaves and the group can finally start their prep, three hours have been lost, but the problems continue.  The arrow that is shot from the South Tower misses the target, and Philippe must scale down the tower to retrieve it.  Then, the guard returns, delaying them yet again.  Once he leaves, Philippe and the group are rushing to get the rigging finished.  However, the rope carrying the walk cable across breaks, sending the cable down several stories.  Fortunately, Philippe is able to tie off his end at the last second, preventing the loss of the cable and the end of the coup.  They get the wire back up and across, but with the sun now rising, another new accomplice gets scared and quits.

Finally, the rigging is completed and it’s time for Philippe to complete his artistic coup, nearly 45 minutes later than scheduled.  Philippe steps onto the wire, takes a hold of his balancing pole, and begins his walk.  With Alice, Barry, and Jean-Pierre (James Badge Dale), the last of the new accomplices, watching from the street and getting everyone’s attention, Philippe easily travels the 140 feet between the towers.  Philippe has accomplished his coup, but he wants more, so he gets back on the wire and walks across it again.  As the crowd below grows, Philippe stops and salutes from the wire.  Just as he reaches the end, two policemen arrive and demand he get off of the wire.  So Philippe just turns around and goes back across a third time.  As he approaches the end, there are now policemen waiting on that tower (the accomplices have fled), so back he goes for a fourth time, and then a fifth.  Each time he crosses, he shows off his balancing skills, getting more bold with each cross, including laying down on the wire.  All the while, the crowd on the street is getting larger and cheering each crossing and balancing skill.  With the Port Authority Police flying around him in a helicopter threatening to remove him from the wire, Philippe goes across for a sixth and final time, this time holding the pole with one hand.  When he arrives back at the tower, he remembers what Rudy said about stepping off of a wire, and once he safely steps of the wire, he is immediately arrested by about a dozen NYC Policemen.  As he is led off, he tells the construction workers how to safely remove the cable without it snapping and hurting anyone.  Upon reaching the ground, the construction workers are clapping for Philippe, and even the police officers tell him that was incredible, but he did break about 100 laws.

The story of Philippe’s walk made worldwide news, but it was soon forgotten because President Nixon resigned two days later.  The judge in Philippe’s trial sentenced him to perform for children in Central Park, and no jail time.  Even New Yorkers, who originally hated the Twin Towers, now began to like them.  As the group prepares to say goodbye and go their separate ways, Philippe decides to stay in New York.  However, Annie wants to find her dream, so she goes back to Paris.  The movie ends with Philippe receiving a free pass to the observation deck of the WTC, with the expiration date crossed out and now reading “forever”. 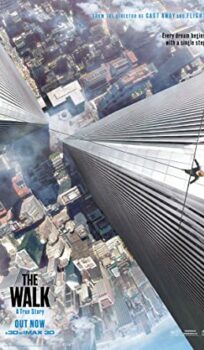