Charlton Heston is a Warlord sent by the Duke to defend a coastal village from the rival Frisians.

He falls for a village girl (Rosemary Forsyth) and employs Droit Signeur to bed her on her wedding night. The next day he does not return her because they are both in love.

Her fiancee (James Farentino) goes to get the Frisians by telling them that Heston has captured a young Frisian Prince. Heston repels an attack by the Frisians. Heston’s brother (Guy Stockwell) then arrives because the Duke is displeased with Heston’s behavior and has given the village to Stockwell.

Stockwell attempts to kill Heston to seal the deal but Heston kills his jealous brother in self defense. Heston then returns the captive Frisian prince to the Frisian king who offers Heston rank, riches and land. Heston declines but has the Frisians give his lady sanctuary.

Heston is then wounded by Farnetino who is then killed by Heston’s faithful servant Richard Boone. As Heston is sagging in the saddle, he heads to the Duke to set things right, with Boone at his side. 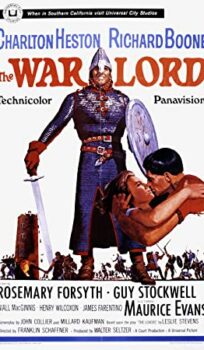