Submitted by Andrea and John L

Mr. and Mrs. Rose share a “lovers’ quarrel” (which lands them in divorce court fighting over who gets the house, well, mansion). Their battleground is their house, each trying to force the other out.

At its passionate conclusion, they are so enraged that, in the course of their battle, they end up hanging from a grand chandelier, which plummets to the floor. Both Mr. and Mrs. Rose know they are near death.

They breathe their last breath.

Postscript:
Lawyer Gavin D’Amato (Danny De Vito) has told his client the entire sad story of the Roses to make a point: a divorce is not about winning or losing, it’s about ending a relationship as quickly and painlessly as possible, so that both partners can move on to a new and (hopefully) happier life.

Gavin tells his client to consider reconciling with his wife- but, he adds, if the client elects to go through with a divorce, the best thing to do is treat his wife as kindly, fairly and generously as possible through the entire process.

The client walks out of Gavin’s office, apparently intending to give his marriage another try. This pleases Gavin, who smiles and prepares to go home to his own wife. 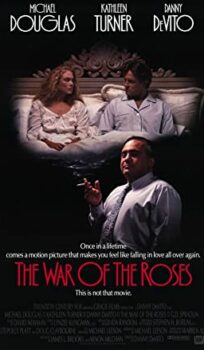