While Stephen (Kevin Costner) and Moe (Bruce A. Young) are pumping water out of an abandoned section of a marble mine, the two of them get caught in a sudden collapse of rocks, and though Stephen is able to avoid it, Moe gets his leg broken and trapped under one of the rocks. He tells Stephen to get out while he still can, but Stephen – remembering how, back when he was fighting in Vietnam, he had to leave his wounded friend Dodge (Gary Basaraba) to die in order to be rescued – refuses to abandon another friend, and he manages to free Moe’s leg. However, more rubble suddenly comes down onto Stephen, heavily injuring him and leaving him in the hospital on life-support. In an apparent effort to take his mind off of his father’s condition, Stu (Elijah Wood) works on the tree fort vigorously, and he takes the padlock from the trunk containing Stephen’s army paraphernalia to use as a lock for the fort’s door.

A few days later, Billy (Christopher Fennell) – the youngest of the Lipnicki siblings – buys a lot of ice cream with the dimes Lidia (Lexi Randall) and her friends Elvadine (LaToya Chisholm) and Amber (Charlette Julius) had bought his silence with in exchange for letting them regularly rummage through his family’s junkyard for building materials for the fort, and he eats himself into a sugar coma. After his father finds him in this state and curses his other children for not looking after him, his siblings confront him and demand to know how he got all of the ice cream. He eventually caves in and tells them, after which they force him to take them to the fort. Stu, Lidia, Elvadine, Amber, and Stu’s friends Chet (Adam Henderson) and Marsh (Brennan Gallagher) are alerted to their approach, and Lidia confesses to Stu and his friends that she and her friends took junk from the Lipnickis. She suggests that they fight for the right to keep the fort and its materials, but Stu – remembering how he promised his father that he would try to work things out with the Lipnickis – refuses this idea and tells her that they must find another way.

When the Lipnickis face off with the gang, Arliss (Donald Sellers) tells Stu that, unless he has a better idea, he and his siblings are going to seize the fort for themselves. Lidia suggests that they do a dare, with the ownership of the fort going to the winner(s). Both parties wind up going to the nearby quarry and into the dilapidated water tower there, and Stu is challenged by Arliss to swim to the other end of the tower and back while it empties and makes the waters turbulent, and the winner will be whoever can make it back first without chickening out. Stu successfully completes the dare despite nearly ending up in peril, but Arliss – masking his fear of doing it himself – tells him that he was just messing with him and that he and his friends can keep the fort. Once Stu and Lidia get out onto the roof, Stu demands for the Lipnickis to return the padlock since they took it, so they drop both it and its key and leave. Stu gets the lock, but when the tower suddenly starts to shake, Lidia tells him to forget about retrieving the key.

Stu and Lidia then visit Stephen in the hospital, along with their mother Lois (Mare Winningham), and they leave ahead of their mother presumably to spend time at the fort. When they return home that night, they find their mother crying, and she tells them that Stephen has just died. Devastated and angry, Stu runs off into the night, and Lidia later finds him outside the old house that Stephen had put a down payment bid on a few weeks earlier at the county auction. They then head for the fort, but they discover Chet and Marsh sitting and sulking outside while fireworks are going off inside, and they explain that the Lipnickis took over the fort while they were away. Stu and Lidia return home and open up Stephen’s trunk, and after they are soon joined by all of their friends, they take out some smoke bombs, camouflage paint, uniforms, and Stephen’s army tags, having decided to take back the fort by force.

In the morning, the kids sneak up to the fort, and they first flush out the Lipnickis with the smoke bombs as well as with a beehive that they drop down into the fort’s chimney. Once the Lipnickis run off, they then go in and ready some makeshift weapons in preparation for a possible retaliatory strike. The Lipnickis later return with weapons of their own, which turn out to be more destructive than theirs, and in the ensuing battle, the Lipnickis destroy the fort (despite Billy pleading with his siblings to consider sharing the place with the others).

Billy gets a hold of the army tags after Stu loses them, and then he looks at the padlock and thinks about the key that is still up on the water tower’s roof, so he heads over there to get it. While Stu is looking around in shock at how the fighting has gotten way too out of hand, he spots Billy ascending the tower and immediately figures out why he is doing it, so he hurries over to stop him. Both his friends and the Lipnickis soon follow him, with Arliss heading up the tower behind Stu. Stu and Arliss get as close as they can to Billy and try to pull him to safety, but the rotted roof gives out from under him, causing him to fall into the whirlpool raging below and get stuck on the drain. Stu dives in and gets Billy out with some assistance from Arliss, but Billy is not breathing. Thankfully, Lidia comes into the tower soon after, and she and Stu use CPR to revive him. Billy tells Stu that he saw an angel that looked like a bigger version of him, and he told him that he had to return to Earth and take care of his father. Arliss picks up Billy and they go home with their siblings, during which the army tags fall off of Billy’s neck. After looking at them, Stu and Lidia rationalize that Stephen was the angel that Billy saw.

After that episode, the Lipnickis stopped hanging around the quarry, and they also stayed away from Stu, Lidia, and the others – except for Billy, who becomes a very good friend to them. The kids would spend the next few days trying to rebuild the fort, but they soon lost interest and gave up, and they all decided to make the front of the town’s movie theater their new hangout, where the boys try to pick up babes and the girls dance. A few weeks later, a man from the Clairville Auction House visits Lois and tells her that the bank has accepted Stephen’s down payment bid on the old house (which was the only bid made on it), so now she and the kids have a house to live in again. The movie ends with Lois, Lidia, and Stu entering their new home. 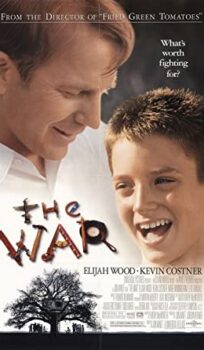