The Warrior and the Sorceress(1984)

Classic Roger Corman with David Carradine, sword fights, and a topless Sorceress in a Yojimbo ripoff.

David Carradine is a wandering warrior who comes into a town with two gangs and one well!  Thinking to earn a little gold, he picks a fight with the well guards of the Zeg gang and cuts down all six.  He then goes to rival gang leader, Bal Caz, and gets hired.  Carradine overhears Bal Caz talking to his lizard adviser, actually a puppet, about how they will kill Carradine after taking down Zeg.

Meanwhile, Zeg tests the latest enchanted sword effort by a topless Sorceress and sees it break.  He claims he will sell her to slavers, but he is mostly interested in getting that enchanted sword.

The two gangs then face off but Carradine announces he will not fight for anyone who plots against his life.  The two gangs start to fight until word that Burgo and his slavers are showing up.  They declare a truce for the time being.  Trading is done and Burgo leaves town, unaware that poison water gourds with Zeg’s coat of arms were planted by Bal Caz.  Carradine sells information to Zeg about the poisoning.

Carradine then rescues the topless Sorceress and gets her out of Zeg’s compound and tells her to hide in the Temple with the town Prelate.  Carradine then runs into the Bal Caz’s lizard and takes him captive!  He goes back to Zeg and sells the Lizard.

The next day, Zeg threatens to kill the Lizard unless Bal Caz leaves town, but we learn that Bal Caz captured the topless Sorceress.  A trade is done and the Prelate takes Carradine under the temple where Carradine diverts the water to the well.

Carradine goes back to Zeg, joins his gang and announces he must inspect the defenses.  While doing so, he once again frees the topless Sorceress and kills a big nasty dungeon octopus.

Zeg figures out he is being played by Carradine and has him subdued at dinner by a four breasted dancing woman with a stinger in her belly button.  Afterwards, Carradine gets beat up but refuses to betray the topless Sorceress.  Carradine tricks his captors by hiding in his cell and manages to escape.  Zeg then learns that the well is drying up.  Zeg goes to guard the well from Bal Caz, but they both see the locals freaking out, so they join forces until….Zeg stabs Bal Caz to death. 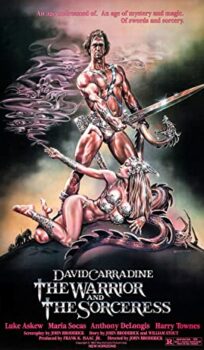