This largely forgotten movie was Disney’s attempt to make a supernatural horror thriller.  It is mainly remembered as being one of Betty Davis’s last movies.

An American family rents a mansion in England.  They have 2 daughters, older teen Jan and pre-teen Ellie.  They are renting from Mrs Aylward (Betty Davis), who lives in the cottage next door.  Jan bears a striking resemblance to Mrs Aylward’s daughter Karen, who disappeared mysteriously 30 years ago.

Strange things begin to happen.  When Jan looks in mirrors, instead of her reflection, she sees Karen blindfolded.  Ellie occasionally goes into a brief trance where she speaks in a deep voice.  They notice a blue light in the woods, that follows them.  There is also a strange man they see in the woods watching Jan.  By talking to the villagers, and piecing together the sentences that Ellie says in her trances, Jan figures things out.

30 years ago, Karen and 3 friends went to an abandoned church during an eclipse to hold an initiation ritual.  Karen was blindfolded while the friends formed a circle around her.  The blue light is some type of energy field intelligent creature from another dimension, here to observe earth.  A bolt of lightning passed through the energy creatures ship, hit the church bell tower and struck Karen.  Somehow, Karen and the creature switched places.  Karen is trapped in the other dimension and the blue light creature is trapped here, unable to return to its ship.  The blue light is trying to communicate with Jan through Ellie, as blue light wants to return to her ship.  The strange man in the woods was one of the teens with Karen in the church 30 years ago.  He thinks Jan is the spirit of Karen returned to haunt them.

There is going to be another total eclipse during a thunderstorm.  Jan get the 3 friends from 30 years ago in the church, to re-enact the initiation ritual with Jan in the center this time.  Lightning strikes. The blue light disappears and Karen is back.  Karen has not aged and is still a blindfolded teen. 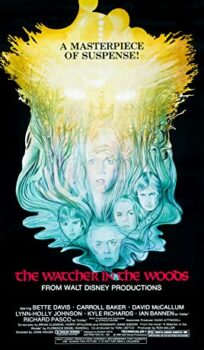