During WW II, Janusz (Jim Sturgess),a Polish man, is sent to a concentration camp in Siberia.  Due to the remote location and harsh climate, the guards don’t think anyone would try to escape. 6 prisoners plan an escape, but at the last minute Valka (Colin Farrell) forces his way along.  Valka is brutal member of the criminal gang that dominates the prison.  He knows the gang leaders plan to kill him, so he joins the escape.  In southern Siberia, they encounter a teen girl, escaping by herself through the forest.  She joins them.  The group walks south through Siberia, Mongolia, the Gobi desert in western China, and Tibet.

The fates of the group members are:

Janusz, and Voss make it to India.  Voss expresses a desire to return to his home country Latvia, and fight against the Russians.  He is sure he will die fighting there.  Janusz is afraid to return to Poland while it is under Russian control.  He continues as a nomad walking around the world.  After communism collapses in Poland, he returns to Poland in 1989.  He returns to his old house, and finds his wife still living there. 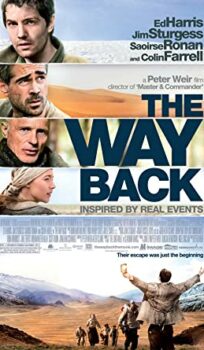