A small black girl on her way to school wanders into a field to pick flowers, and falls down an abandoned well.  When she is reported missing, a police search begins. Several people saw a white man (a young Harry Morgan, later famous as Col Potter on MASH).  The man, Claude Packard, walked her across a busy street, and bought her a flower.  Blacks in the town are sure he abducted her, and that he will get off since he is white.  His brother Sam (Barry Kelley) owns the construction supply business, and is one of the wealthiest men in town.  The girl’s father, Mr Crawford (Ernest Anderson) and his friends confront Sam outside the police station.  As the groups yell at each other, Sam has chest pain and is taken to the hospital.  Claude is a mine supervisor between jobs.  He says he was just trying to be nice to a little girl who seemed sad.

Rumors spread among whites that Sam was jumped and beaten by the black group. Rumors spread among blacks that the police know Claude is guilty but let him go. Groups of young men begin attacking the other race.  Fights are breaking out all over town.  It looks like a full race riot is going to break out.  There are not enough police to maintain order, specially since some deputies admit they will fight with their race rather than try to maintain order.  The National Guard can not get there in time.

A boy crossing the field sees a sweater by the well opening.  The girl is found, but she is stuck 60 feet down the well.  The top of the well is crumbling, and if they try to go straight down, she is likely to be buried in a cave in.  They need to dig a new tunnel at an angle to get her.  As a miner, Claude knows how to do it and directs the efforts, while Sam’s construction business provides the needed supplies.  The town is drawn together in the rescue, and the girl is brought up alive.

Note:
The movie is balanced in its presentation of the groups.  Some whites are noble and brave (like the waitress with a frying pan who saves the black cook from a mob). Some whites are cowardly and evil, like the officer who arrest the black man who is being beaten by a gang of whites or the deputy who says he will side with the mob against the police.  Some blacks are noble and brave, like the men joining the police to stop the mobs and the black businessmen who meet with the mayor.  Some blacks are not like the mob that attacks Claude when he is handcuffed.  Sam is not a one dimensional hero.  While he provides free equipment and materials for the rescue, he is a blustering bully trying to free his brother.  He is racist, not just by our standards, but by the standards of that time.  Claude likewise is not one dimensional. He is angry at the world after he is released and initially has no desire to help save the girl.  He just wants to get out of town.  Only when he realizes that they will trigger a cave in that will smother the girl, does he consent to help.  The movie really comes across as an expression of hope that the racial divide in the country could be healed. 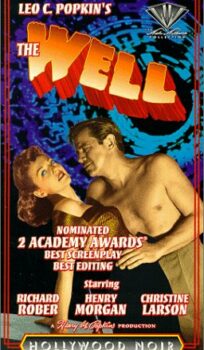