Kathryn Bolkovac (Rachel Weisz) is an American cop who decides to do a tour as a peacekeeper in post-war Bosnia for the quick cash so she can move closer to her kids whom she lost in a divorce.  She soon increases in UN peacekeeping rank aiding a local police officer, Viko (Kathryn Bolkovac), in Bosnia’s first battered woman case before the courts.  In her new head role of a department for equality she discovers that there brothels posing as local bars/taverns.  In one bar she finds that it’s more than just a brothel, it’s a place for female slavery, rape, human trafficking and bribery.  After going to her superiors with this information, she finds UN and other nationals (who have diplomatic immunity) are involved in every aspect of the trade.  Her head boss, Madeleine Rees (Vanessa Redgrave) brings in a friend from Internal Affairs, Peter Ward (David Strathairn) to aid Kathryn’s search for more information.  IA decides that they don’t want Kathryn to continue her search, closes the files and terminates Kathryn’s tour.

Kathryn and Peter devise a plan to leak the information to the media. While Kathryn is trying to escape the office to grab the closed files she gets stopped by the HR guy and Peter.  Peter takes the files and the HR guy lets Kathryn go.  Kathryn and Peter meet up.  It looked like Peter double crossed Kathryn but he doesn’t.  Peter gives Kathryn the files and she goes on BBC TV to reveal the truth in Bosnia.

The last shots states that the US continues to contract out peacekeeping.  No peacekeepers were charged but many were sent back home. 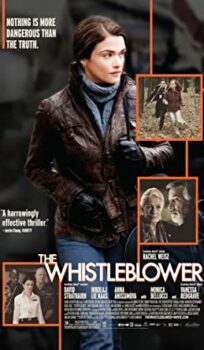